Over the last four years, I have embraced and implemented gamification and game design principles in my U.S. History classroom. When I have presented this idea to colleagues, there is sometimes a fear that this might lead to a loss of rigor or relevance.

The most common misunderstanding is that video games are just easy fun. It is true that games are entertaining, but successful video games must also efficiently teach the skills of the game while engaging the player with meaning and purpose; otherwise, the player quits.

Games do this by enabling players to learn through feedback loops, where they can fail and make rapid revisions in a process sometimes called “Freedom to Fail.” This concept can be applied to modern classrooms; however, we should call it “Freedom to Succeed.”

During my childhood, my family was what we would now call working class. I was blissfully unaware of my parents’ sacrifices as they worked to provide for my sister and myself. Since my parents were always careful with money, I was surprised when they brought home one of the most important learning devices my generation had to offer: the original Nintendo Entertainment System.

I was first introduced to Super Mario Bros. when my cousin brought his new Nintendo to a sleepover. My father and I were immediately hooked. I didn’t know at the time that video games were teaching me more than how to rescue princesses from evil dragon turtles. Each time a player presses Start to begin, they risk failing.

The lesson of a video game is that failure is not the end of the road. The failure is merely the first step in a journey toward success. Failure is the freedom to engage with the new ideas and strategies that ultimately lead to success. My misspent youth was one long lesson in feedback loops. 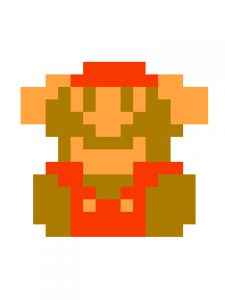 One of my favorite moments in Super Mario Bros. is when Mario or Luigi loses a life. Due to the technical limitations of the 1980s technology, the graphic looks like an 8-bit version of the shruggy emoticon: ¯\_(ツ)_/¯. I don’t know if this was intentional or not, but what a great message for my 10-year-old self! You have failed, but who cares?

Education reform and gamification both call this “Freedom to Fail.” This concept is often misunderstood as letting students fail a course, but anyone who has ever picked up a joystick knows the game doesn’t stop because you’ve made a mistake. What Mario taught me every time I ran into a Koopa Troopa or fell into a bottomless pit was not that I failed, so now I can quit, but rather that I was Free to Succeed!

Mario was telling me that I failed, but I am not a failure. His 8-bit eyes did not see what the big deal was about making a mistake or two. His shruggy-shouldered message was that I had failed, and now I know my strategy was not productive or that I need to improve my execution. I had failed but could immediately revise my work and try again.

Like in video games, students will fail, but making a mistake does not mean the game is over.

Creating feedback loops in the classroom

Video games teach that failure is fundamental experience in life but doesn’t define the player. This is a lesson that we can easily apply to the classroom by designing feedback loops into the student experience.

It is not uncommon to hear teachers complaining about a stack of papers waiting on their desk. I have been that teacher, and often the students don’t get the papers back for a week—sometimes longer. This slow feedback means that students cannot rapidly fix their mistakes and that they will continue to make the same errors while the papers are on that desk.

Even worse is that by the time students get the graded work back, they see it as a summative assessment rather than a formative one. They have already moved on with a week’s worth of other work and do not want to go back and fix any problems on that “old” assignment.

If we build in a rapid feedback loop, students can immediately see their mistakes and fix them before earning any credit. With new tech tools and concepts like blended learning and mastery-based grading, this is now possible in the modern classroom. In blended models, students can immediately confer with a teacher during class time and receive real-time feedback. The teacher can quickly point out successes and areas that need improvement and send the student back to work.

Super Mario gave me professional development that I use every day in the classroom. Like in video games, students will fail, but making a mistake does not mean the game is over. Creating feedback loops and allowing students to fix mistakes, develop new strategies, and take risks is an important part of education. Students may fail from time to time but need to be Free to Succeed.