“The object of the game is to occupy every territory on the board and in so doing, eliminate all other players.”

If we take out “on the board,” how many technology-based games could taut these objectives: World of Warcraft? League of Legends? Starcraft? Sid Meier’s Civilization series? But these are the objectives for Risk, the board game invented by Parker Brothers in 1959.

The idea of using Risk as a teaching tool came to me during a lesson on the early exploration of America. I was trying to explain that many European strongholds kept trying to gain access to different parts of the Americas, and many of these conflicts came through battles with the current occupying country. I asked my 5th graders if they had ever heard of the game Risk. Of course, they looked at me like I was crazy. 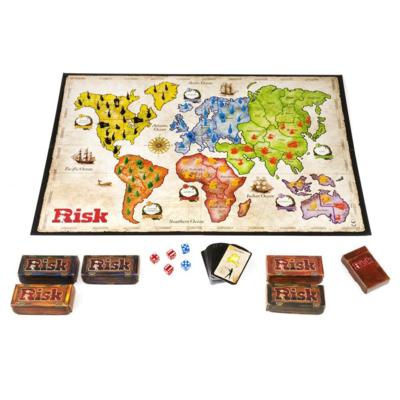 I began to explain the basics of the game and told my students that this was basically how the land in the New World was occupied and changed ownership. Even with that basic explanation (not even showing the game board), things started to click—no, not on the computer, but neurons firing in the brain.

That same discussion also included the Six Flags franchise. Do you know why it’s called Six Flags? The Six Flags over Texas are the six flags of occupation that have been flown over the current state of Texas. My students love what I call “life questions,” and these can lead to great discussions.

As a teacher who loves technology, I am constantly looking for ways to teach a subject using the internet and our Chromebooks. But are we, as teachers, putting too much into available technology and ignoring one of the most important computers we ever use—our brains?

There are obviously pros and cons to teaching old-school or teaching using technology. Somehow, though, when I pull out the old-school items, the students catch on to an idea better. Board games would obviously give students more opportunity with social skills (no, you can’t count chatting during an online game; it’s not the same thing).

Online games are fun for students, but when it comes down to it, they are all basically the same: answer question, earn points, world domination! So, what board games from the great beyond could we use to teach specific skills? Axis and Allies, which takes Risk to a higher level and focuses on the players of World War II? How about Monopoly or The Game of Life, just to teach about the twists that life throws?

Sure, technology is great, but what non-electronic ways can we use to make topics more realistic for our students? Don’t be afraid to take a “risk.”