UNESCO recently published a report about how games can support peace education and conflict resolution.

The report from the United Nations Educational, Scientific, and Cultural Organization (UNESCO) and York University’s Paul Darvasi examines a number of “serious games.” These types of games address important societal issues—such as Peacemaker, about the Israeli-Palestinian conflict; Revolution 1979: Black Friday, about the Iranian revolution; and Hush, about the Rwandan genocide, among many others.

James Paul Gee’s “What Video Games Have to Teach Us About Learning and Literacy” (and his 36 “learning principles” of games) is cited frequently in the report. Games can be more effective than other strategies to negotiate intergroup conflict (such as live role-plays), UNESCO says, because interactive technology can create more complex and structured simulations that also yield analyzable data:

The dynamic virtual environments in digital games and simulation are central to their educational value because they enable what Gee (2003) terms situated understanding or situated learning. Rather than absorbing skills and knowledge through the abstractions of texts or lectures, situated learning is underpinned by the theory of situated cognition, “which suggests that learning is tied to the authentic activity, context, and culture within which knowledge is developed and used” (Brown, Collins, & Duguid, 1989 in Turkay, Hoffman, Kinzer, Chantes, & Vicari, 2014, p. 5). The brain, then, learns better by actively “doing” in a meaningful setting and, as will be argued in this paper, this can have important implications to the work of peace education because a situated understanding of culture and context can potentially lead to more knowledgeable mediation and improved mutual understanding between adversarial groups.

Furthermore, UNESCO refers to “virtual peace education” as a way to use “virtual and online encounters” to help establish contact between hostile parties during times of active conflict.

Video games, the report concludes, can “provide safe spaces for contact and collaboration, encourage perspective-taking, produce empathy, help negotiate ethical and moral dilemmas, stimulate intercultural understanding,” and more—but extensive work needs to be done before we can fully leverage them. 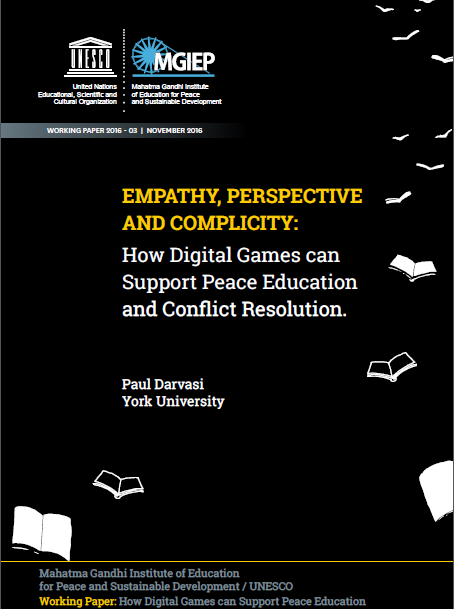 For example, one study about Peacemaker involved 147 undergraduates in political science and conflict resolution classes: 38 Turkish and 39 American students represented “third-party” views, and the “directly affected” consisted of 50 Israeli-Jewish and 20 Israeli-Palestinian students.

Researchers found that because the game itself incorporates cognitive empathy, perspective-taking in the game led to attitude changes in the “third-party” group—a finding that suggests a potential for positive impact on chief stakeholders in a conflict. Gameplay also resulted in significant improvement for all participants in knowledge about the Israeli-Palestinian conflict.

However, Peacemaker was less successful in other ways. The “directly affected” group was much more resistant to change, which is consistent with other studies involving participants who closely identified with their in-group.

Hush, a game involving emotional empathy, is flawed as well. Players assume the role of a Rwandan Tutsi mother, who hides with her baby as Hutu troops patrol nearby. To prevent the baby from crying and giving away their location, players must sing a lullaby by typing letters that appear onscreen. Failing to do so results in their discovery. It’s an effective but highly limited experience, the report points out, as it spans only five minutes. It’s an effect that frustrated game developer Anna Anthropy and one that Games for Change’s Asi Burak, in our recent interview, described as “just a window [into an experience].”

The report suggests some beneficial changes that could be made to either the games themselves or the context in which they’re used (eg., Hush in a pedagogical setting to study the genocide in a deeper way)—demonstrating the promising potential of these games but revealing limitations as well, where mismanagement or unintended consequences could result, as with any other media.

“Despite these challenges,” Darvasi writes, “there is much room for optimism as advances in psychology, analytics, psychometrics, neuroscience, game design, technology, and other relevant areas will presumably further the field and lead to important breakthroughs and viable intervention strategies.”

Overall, “the existing evidence indicates that digital games are shedding their stigma as a force of corruption on our youth and promise to become powerful agents of social and personal transformation,” the report says.

You can read the full report here.