In this four-part series, we’ll look at the four most effective classroom management strategies as identified in the book Classroom Management That Works: Research-Based Strategies for Every Teacher (a meta study of over 300 research studies into classroom management) and how Classcraft uses them to create meaningful changes and positive culture in the classroom. 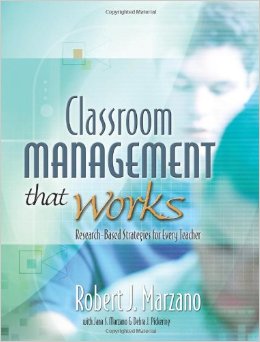 “It means you should prioritize positive reinforcement whenever you can, but at the same time you shouldn’t hesitate to punish when you have to,” Young said. “A lot of teachers are either doing one or the other because they feel more comfortable.”

The tricky part is being fair and remembering the important component of teacher reaction. Classroom Management That Works explains this as “the verbal and physical behaviors of teachers that indicate to students that their behavior is appropriate or inappropriate.” Both reinforcement and punishment are more effective when the teacher intervenes right away and gives instant feedback rather than waiting until the behavior has passed.

A related strategy to this is group contingency. For example, telling students that you’ll reward them if the entire class works quietly for the whole period. You’re leveraging peer pressure to get desired outcomes. This also allows you to announce your expectations ahead of time and have students work together to achieve them.

A third type of disciplinary intervention is tangible recognition, where teachers give kids recognition that has meaning to them. Classroom Management That Works calls this “a symbol or token for appropriate behavior.” For example, in middle school, this could mean praising a student in front of the whole class. Or you could offer to push back an exam because of how hard they worked that day. The social validation or another positive reward matters a lot to students.

How this works in Classcraft

Punishment and reinforcement: Teachers who have enjoyed a lot of success with Classcraft spend more time giving XP than taking away HP. Reinforcement comes first, and punishment is a last recourse.

Earning XP brings students closer to their goals of gaining powers, helping their teammates, and unlocking cool gear and pets. Because of the game, the reinforcement has extra meaning for them.

Teacher reaction: The teacher also makes it clear that they’re reacting by giving XP or removing HP as soon as the behavior happens, providing instant feedback. Kids will often “ask” teachers to react.

For example, if a student was respectful, they’ll remind the teacher to give them points for that. So students will help to enforce rigor.

Group contingency: Behavior also has an impact on the student collective. When a student loses all their HP due to repeated negative actions, it affects their group members, causing them to lose HP as well.

For some students, their top concern becomes the well-being of their team, even if they don’t care about any other aspect. The social piece is very important to some kids.

Tangible recognition: Since everyone in the class knows the teacher is giving points for behavior, these public and tangible acts create social values.

Their characters (“avatars”) are also a source of pride. The way they look is an accumulation of all their progress with good behavior throughout the year. Allowing students to customize them and show them off creates a sense of social recognition.

Stay tuned on Thursday for the next entry in our four-part series on “What Classroom Management Techniques Work Best.” See Part 1.

You can also learn how to create your own successful classroom management plan in five easy steps.