Unable to visit Spain or France? No problem. Now you can teach language education in virtual reality.

The Mondly language-learning platform from Romania-based ATi Studios is now available as a virtual reality app. That means students can have a more immersive experience while learning a language. Imagine practicing how to order food in another country … while actually standing right there in the restaurant. 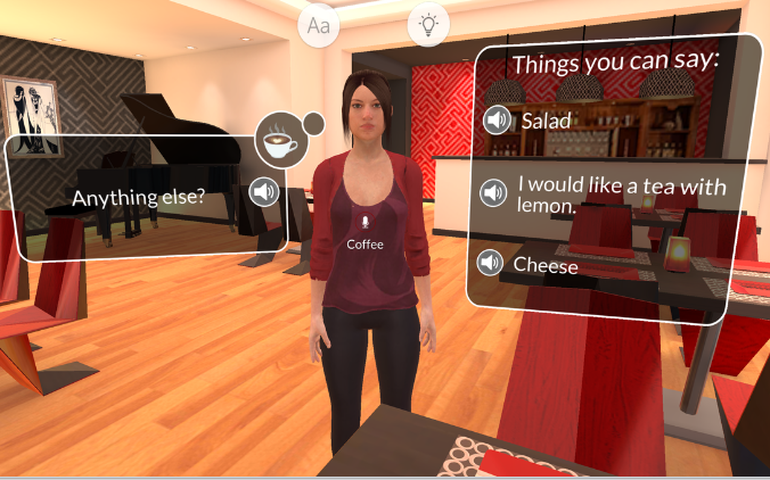 “Because VR is so immersive, we quickly realized that traditional speech interaction models that require a tap or a voice command to enable speech recognition would kill the flow of the experience,” Alexandru Iliescu, the CEO and cofounder of ATi Studios, told ZDNet.

“So we developed our own automatic voice detection system. The result is amazing, the conversations with the virtual characters happen as naturally as real-life conversations—they just flow.”

ATi Studios released the Mondly text-and-speech chatbox last year in August for its regular app, available on PC, iOS, and Android. The chatbox features an advanced speech recognition engine that creates “adaptive visual responses” based on the word or phrase the person used. And because it’s a self-learning engine, it has added millions of new phrases and responses since release.

More companies are exploring the potential of VR for education, such as HTC Vive’s Engage, which enables teachers to create and teach their lesson plans in virtual reality. Even tools as simple and affordable as Google Cardboard can be effective.

Last year, Jennie Magiera, the chief technology officer for Des Plaines School District 62, told us in an interview, “What I found was that as a teacher, sometimes it’s really hard to get into those immersive experiences for students, especially when they’re hard-to-understand concepts out of context. […] So those are the types of problems we want to solve and the experiences we want to provide to our kiddos using virtual reality.”