Assassin’s Creed, one of the most popular video game franchises of the past decade, is introducing a new digital experience that students and teachers will love: a virtual re-creation of ancient Egypt, complete with interactive guided tours, that’s perfect for a class field trip.

The new Discovery Tour arrives early next year as a free update for Assassin’s Creed Origins, which launches October 27 for game consoles PlayStation 4 and Xbox One, as well as PC.

“This is something we’ve wanted to do for a long time, that we’ve been asked to do by teachers, by institutions,” said Jean Guesdon, the creative director for Assassin’s Creed Origins. “Discovery Tour is another way to enjoy the beauty of the world we’ve re-created. It’s a more educative mode, so it’s clearly focused on education and on bringing to people actual facts, more academic knowledge.” 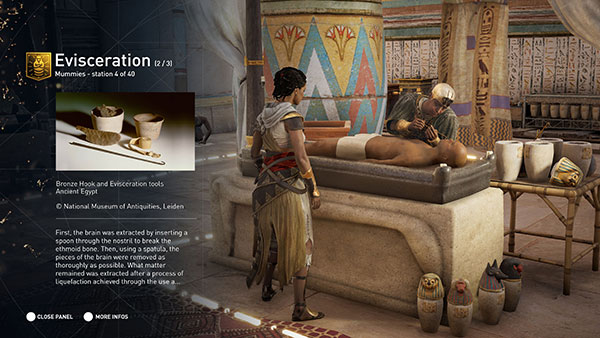 The Assassin’s Creed series, which puts players in the role of an assassin in different time periods and countries — such as the Renaissance (Italy), Colonial era (America), and French Revolution (France) — has always dug deep into history, providing real historical information about people, places, events, and architecture as a supplement to the game experience.

But the Discovery Tour takes the assassin combat out of the equation. It’s a new game mode that is separate from the main game and re-creates Egypt through a “combat-free living museum” with interactive tours designed by historians and Egyptologists. It covers subjects such as the Great Pyramids, Cleopatra, the mummification process, and more, and players can freely explore the game world at their own pace — visiting sites like Alexandria, the Sand Sea, and the Giza Plateau.

“We spent years recreating Ancient Egypt, documenting ourselves, validating the content with historians, with consultants, and we feel that many more people than just the players can benefit from that,” said Guesdon.