An interview with Carina Hilbert 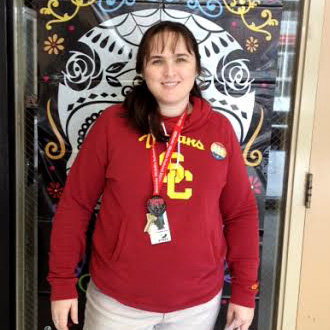 Carina Hilbert is finishing up her Masters in the Art of Teaching in Teaching English to Speakers of Other Languages through the University of Southern California. She is a presenter and instructor on blended learning and is certified in both English and Spanish, 6-12. She lives in Kalamazoo, Michigan with her two brilliant children, a needy dog, and a loud cat.

Thanks for talking with us today, Carina! Tell us a little about yourself as an educator and what subjects and grade levels you teach.

This year, I am teaching in two different levels. I teach in an alternative high school in the morning, and in the afternoon, I teach in one of the middle schools. I teach Spanish this year at Kalamazoo Public Schools.

What changes have you seen in your students since you’ve introduced the game?

Last spring, I had a class that was just angry. They were angry that they had to take a world language. They were angry that it was a requirement they had no say in. They were mostly freshmen, some sophomores, and it was in a different school district, and they were angry that we’d switched teachers. … Starting Classcraft turned them around a total 180. It turned into, “What’s the random event of the day?” They would run into the classroom, when before I had to stand at the door and basically shove them in at the bell.

What was funny was, I had several students who were mad about the game. “This is stupid. This is juvenile. We don’t want to have anything to do with this.” And the kids were the one who turned them around. “You’re on my team, you better buck up.” … A lot of kids these days are gamers, so they’re very comfortable with the platform. They’re very comfortable with the set-up.

What customizations have you made to the game to adapt it to your Spanish classes?

They get XP for speaking in Spanish. It’s not a lot, but it’s anytime I catch them. I always tell them, though, “It can’t just be ‘hola’”!

How has Classcraft improved how you teach your world language classes?

Classcraft has helped in a lot of ways. I would say one of the big things that it has helped me with is lowering what we call in language as the Affective Filter. Stephen Krashen is a huge theorist in second language acquisition, and he has a theory that says that if students feel bad about a language … if they’re not excited about learning, if they attach negative feelings to the experience or to the teacher or to what they’re learning, that they won’t learn it. And it makes everything that much harder.

One of the problems that I run into in teaching Spanish is that it’s a requirement. Here in Michigan, they have to take two years of the same foreign language. I have students, especially at my alternative high school, who have taken Spanish and failed it more than once. I’ve got a couple kids who have failed it as many as four times before. So when they walk into the room, they don’t want to be there. They don’t like Spanish; they don’t like what we’re doing. Classcraft gives them a reason to be excited about coming into the room.

What would you tell other teachers who are considering trying Classcraft?

When I talk with other teachers, their concern is that you lose a lot of instructional time. But last spring, I actually came out ahead. I had kept track of how much time I was losing — especially with my worst-behaved class — just for discipline. And then I kept track of how much time I was spending on Classcraft, and I came out ahead on instructional time because I spent less time on Classcraft and overall less time on discipline than I had spent on discipline without it.

We are told to put a lot of time and effort into team-building at the beginning of any term. Well, that’s what Classcraft is. It’s team-building. So if you sink the time in at the beginning, you’re still ahead, or at the very least it’s neutral. It’s not like you’re losing massive amounts of instructional time. Although I will say that when I have to start spending more time on waiting for the kids to calm down or whatever, I take away Classcraft. And that gets them quiet fast.

For world language teachers, what is the one reason to give Classcraft a try?

Now we’re in where a lot of states require it for all students for graduation, not just the college-bound ones, and it turns into a situation of kids who are already struggling in school now are thrown into a subject that’s going to be the hardest that they’ve ever had. … It’s very easy for them to give up.

Classcraft gives kids a reason to want to come to your class. And if they learn some of the target language while they’re there, awesome.