It took an older cousin to expand my consciousness. Three years my senior, he introduced me to Led Zeppelin, sophisticated home computing (5 ¼” floppy disks and a cradle modem!), and last but not least, role-playing games. 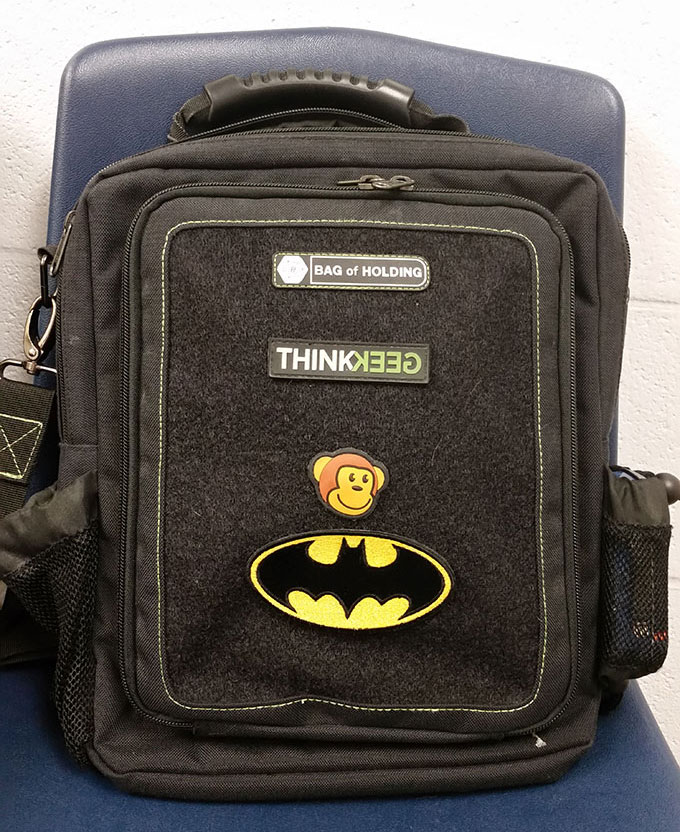 The first RPG I ever played was TSR’s Star Frontiers, and from there my fate was sealed. It wouldn’t be an exaggeration to say that for most of the 1980s, RPGs loomed large in my life. Why? Well, in a philosophy I appreciated later as a teacher, RPGs offered both a tightly managed system of rules as well as a recognition that fate has a part to play in your outcomes.

Management systems gave me a sense of comfort and control in a classroom, but I always had to be open to how life, just like in an RPG, often influenced my plans with a seemingly random roll of the dice — in the form of a suddenly ill student, an academic breakthrough, or an unplanned fire drill. And above all else, I reveled in the imagination you needed, especially in the fantasy, sword-and-sorcery RPG worlds. Keep in mind that in the decades before the CGI special effects of Peter Jackson’s The Fellowship of the Ring were possible, gathering friends to crouch over a table and participate in a “dungeon crawl” was the superior experience to any attempts on film.

As an adult, my fondness for fantasy RPGs followed my education. (For example, I couldn’t just have a messenger bag, but I had to have a “bag of holding,” pictured above left) When a teacher in my district introduced the gamification of Classcraft, I was hooked and delighted. When a pair of our elementary teachers asked for more information, I gladly made them a Google Doc primer, feeling like a Dungeon Master leading his players on a campaign adventure.

Classcraft is a great tool to gamify your classroom. Try it for free today.

But you don’t have to stop at Classcraft. Here are some educational RPG tools to integrate into student learning … and they’re also free!

One of the hardest things about completing your to-dos and creating better habits is motivation. But what if you gained Experience Points (XP) and Gold Pieces (GP) when you did positive things?

Using a charmingly retro 8-bit graphic interface, Habitica implores you to “Gamify your life today!” by letting you customize project lists and habits while personalizing your avatar character.

As tasks are completed, you can “level up” while upgrading your avatar with better weapons and armor. Additionally, there is a social aspect where you can engage with others to compete or collaborate together, which could lead to quests or “big boss” battles.

The interface is engaging yet simple enough for even younger students to learn. (It’s always a good idea to get permission from parents of younger students to use digital tools in your classroom.) I can imagine students using Habitica to keep up with their project-based learning timeline, maintain progress on their personalized learning playlist, or simply track their homework and study habits.

Habitica can be accessed via web or iOS/Android apps, and you can log in with your Google or Facebook accounts (or sign up with an email and password). While it’s free to use, you can purchase “gems” that can unlock Quests and special equipment/avatar upgrades. 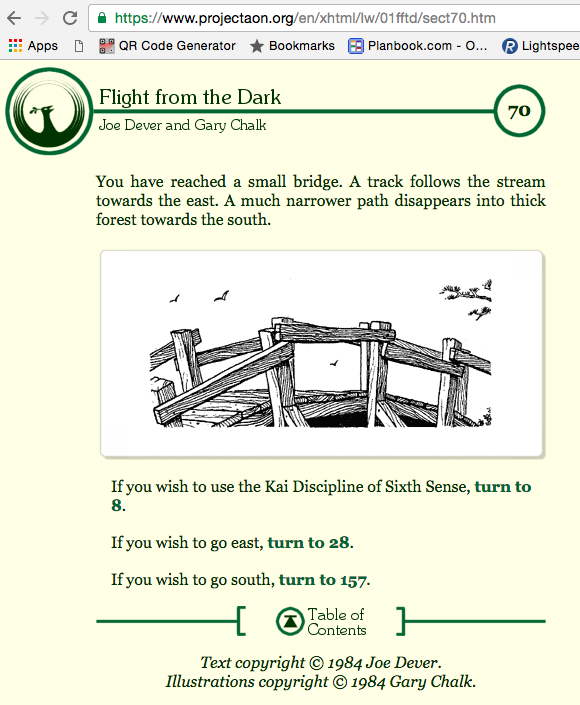 One of my favorite reading series was the Choose Your Own Adventure books (originally published from 1979-1998). A typical CYOA book was told in second-person, would present a narrative moment (“You walk to the end of the dungeon …”), and would end in a branching logic choice. The choice would have you turn to a certain page number where the narrative would continue, eventually ending in your death or a successful resolution.

CYOA inspired more sophisticated “gamebooks,” where battles or other outcomes would be determined by dice or random charts, and characters would grow in skill over subsequent books. One such series was Lone Wolf (1984-1998), created by Joe Dever. I loved the series for its well-built fantasy setting, the opportunity to do a solo RPG, and the portability of only needing a paperback and a pencil.

Sadly, Joe Dever recently passed away. However, a few years ago, he made arrangements for the entire series to be available free online at Project Aon.

As a digital learning coordinator for my district, I have struggled to find quality free e-books except for classics that are now in the public domain. The Lone Wolf series provides an antidote to the same old same old, with dozens of highly engaging, fictional free texts that not only make active literacy skills necessary, but also help students practice logical analysis (“cracking the code” of the various branching paths in order to complete the story) and spatial/geographical awareness (reading maps).

Bonus: You get to do a little math every time you enter combat, too.

Each book can be downloaded in multiple formats (such as .epub for Nooks and .mobi for Kindles), as well as viewed in full web versions. The site also contains helpful FAQs on the gamebook rules as well as online ways to keep track of your statistics. If you want something for an Android tablet or smartphone, consider the free Lone Wolf Saga interactive app, which accesses Project Aon’s database to provide a mobile interface to the gamebooks.

Create your own ‘Choose Your Own Adventure’

Students don’t have to settle for choosing choices in someone else’s adventure — they can write their own!

An easy way to do so would be with Google Slides. The trick to making it work is using links to a direct slide. When you are on a particular slide, copy the URL in the address bar (NOT from the blue Share button!). Now you can insert this hyperlink anywhere on another slide. When this link is clicked, it will advance to the specific slide.

Students can write their story one slide at a time. Let’s say they write their introduction on Slide 2 (after the title slide). At the bottom, they can give at least two narrative choices. Choice #1 leads to a random slide inside the presentation … let’s say Slide 23. Choice #2 leads to, say, Slide 11. (Tip: don’t actually tell the slide number; just let the hyperlink do the work for you. This will also save time if the slide order changes around, as the hyperlink will work regardless of where in the presentation it is located or which number slide it actually is!)

Of course, assuming you didn’t fail, these slides would branch into further slides and continue until the ending slide. Students can publish their “slidebooks” to each other as well as outside of their class. Just like the CYOA printed books, there may be a temptation to “cheat” and view all the slides to see options, but it’s more fun if you “read” the slides in Presentation Mode. Alice Keeler provides some more information on how to make CYOA Google Slides, as well as an example slidebook. Of course, you could easily go beyond mere text. Include pictures and YouTube clips!

Speaking of YouTube, you could do branching logic with videos as well. Because you can embed two or more links in a YouTube video, you could do the same approach making CYOA videos as you would with slides. I have a video overview of how to accomplish this.

Last but not least, I will share one more free CYOA tool: Inklewriter, currently in beta, allows another way to write and share branching narratives with minimum fuss. Accounts have to be created with an email and password, but the site has some clever suggestions on how to “create” log-ins for students. (Inkle Studios has also released some well-designed CYOA story apps, but unfortunately, they are not free.) 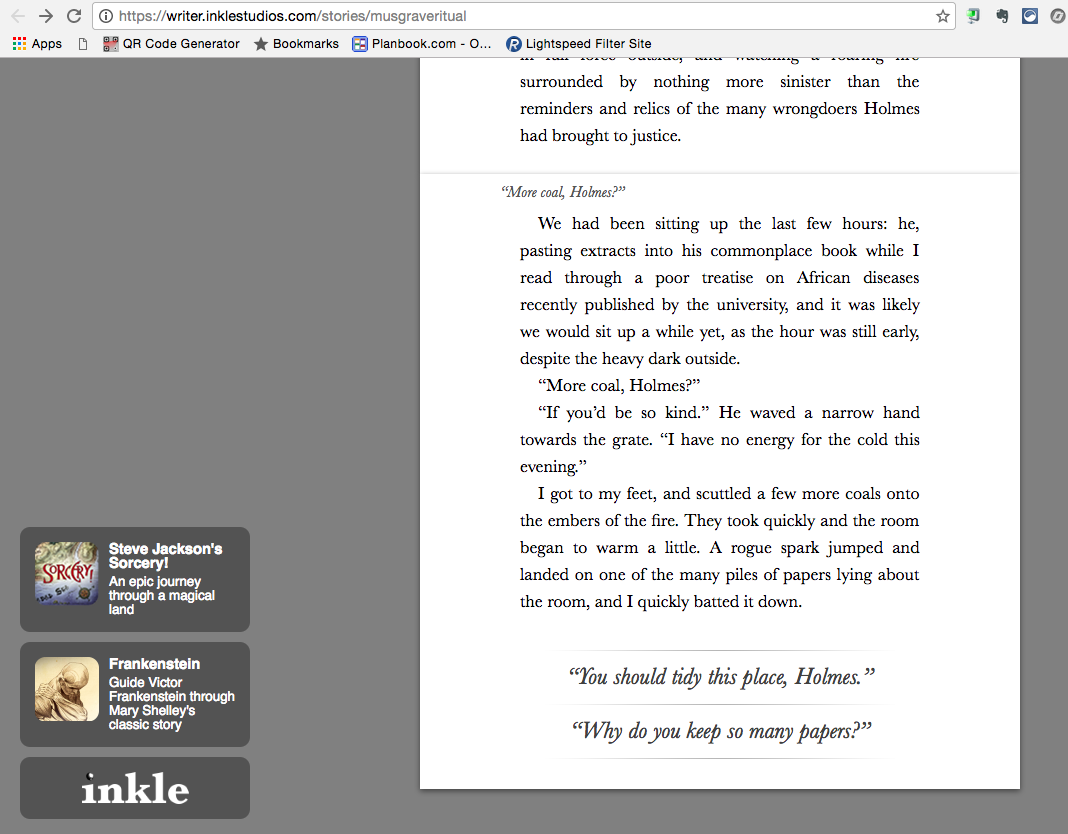 I would be remiss if I didn’t also add one analog tool. Consider ways you can bring tabletop RPGs into the four walls of school itself — if not during instructional time, at least as an afterschool club. After all, it’s not a stretch to go from critical hits on a gaming table to critical thinking in the classroom. Creative imagination, problem solving, collaboration, playing roles, and interacting with others in a way that teaches true empathy … all of these cognitive skills are practiced in a tabletop role-playing game.

In a world full of isolated digital distractions and numbing imagery, a place where people talk and visualize and work toward a common goal is essential. I can’t think of a better quote that sums up the education value of RPGs than the following observation from Ethan Gilsdorf’s TEDx Talk on “Why Dungeons & Dragons is Good for You (In Real Life)”: “Thanks to fantasy role-playing games, I use my imagination, and I’m prepared, and I can think of out-of-the-box solutions to problems, and I know that I don’t have to go it alone.” We can fondly hope all of our students reach that point of experience.