The ETC Festival 2017 this week showcased some of Pittsburgh’s best student-designed games and experiences using technology such as virtual reality, mobile devices, and occasionally the more bizarre — like a fully functional Egyptian tomb.

I attended the festival at the Entertainment Technology Center, part of Carnegie Mellon University, where more than 25 student-created games and experiences were on display. Many are part of Jesse Schell (of Schell Games) and Dave Culyba’s Building Virtual Worlds curriculum, where students collaborate to build a virtual world in two weeks, as well as Experience Design and other courses at the ETC.

Below are five examples of the innovative, creative, and fascinating games and experiences that the ETC Festival had to offer.

1. ‘The Tomb’ — a live puzzle-solving experience

For the first room I chose, the experience begins as soon as the participants walk through the door, explained Ruth Comley, an assistant teaching professor at ETC who runs a course on Experience Design. That’s because “The Tomb” doesn’t just immerse its participant in a room-scale re-creation of an Egyptian tomb, complete with hieroglyphs and sarcophagi. It takes them on a journey to another time and place. 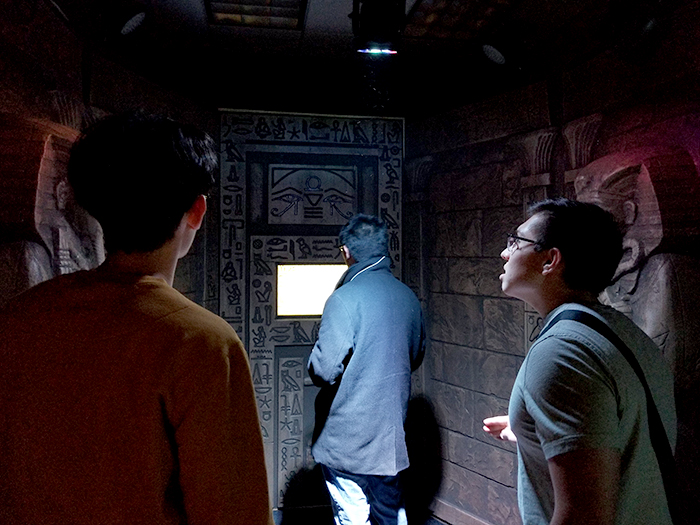 The two students leading the experience, Xavier Apostol and Junwoo Cheong, called the participant “professor” and asked if he was ready to lead them in a great discovery. They ushered him into the tomb, where lights flashed and sounds rumbled to create atmosphere, and a recorded, disembodied voice laid out the story. The participant went hands-on with the environment, solving puzzles by pressing his hands to hieroglyphs on the walls or using a physical device (shaped like a scarab) to reveal the tomb’s secrets.

This all happened while Apostol and Cheong played the part of assistants along for the adventure, prompting their newly appointed “professor” with clues and reacting with amazement and curiosity to the lights and sounds.

At one point, the simulation froze. A bug in the program had cropped up. “How are you going to get out of this?” Comley asked Apostol and Cheong. After a moment’s uncertainty, they jumped in, once again adopting an accent and deepening their voices for dramatic effect: “Professor, it appears the tomb is experiencing some sort of difficulties. We may have to do more excavating from the outside.” 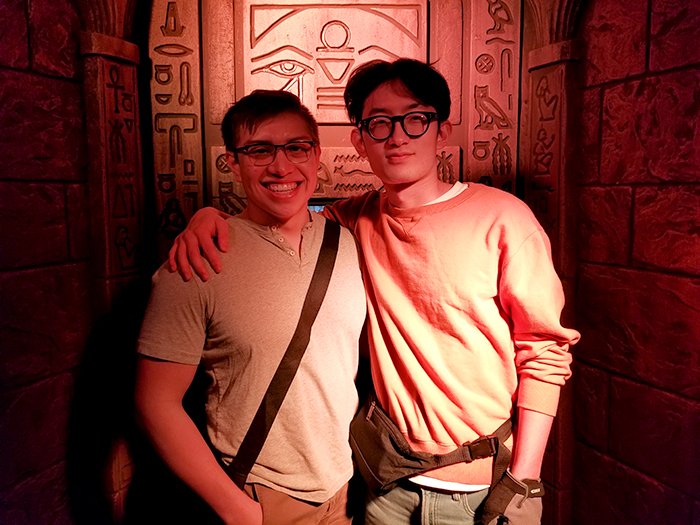 That was a frustrating moment for them, Apostol and Cheong told me. But the experience of seeing how someone else would approach their project and its story-based puzzles teaches them an important lesson about the value of live feedback and adjusting the experience based on what they learned.

2. The Gallery — a virtual museum with interactive paintings

“The Gallery” is a room-scale VR experience that lets participants touch paintings in a virtual gallery and then go inside the artwork to solve puzzles.

The extra cool part? The virtual gallery is retro-fitted to the real physical space, meaning that the team built the gallery virtually first, then matched it to the room they were assigned for the festival. And they decorated the actual room to look like a gallery, too. 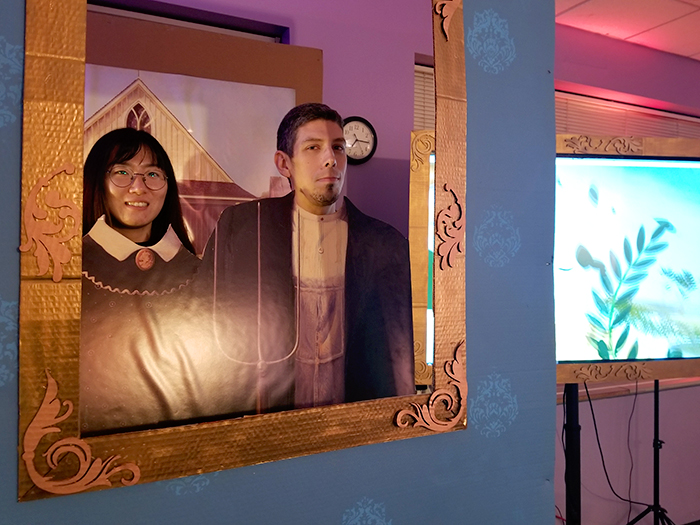 One of the paintings in their virtual gallery is Sandro Botticelli’s “The Birth of Venus.” Participants got to touch the painting and enter an abstract story world where they sought to activate the elements in the artwork, such as wind, spring, and flower. The students who made the experience even toyed with the idea of love (represented by Venus), so participants can pick up Cupid’s bow and arrow and shoot it at objects. One participant popped a giant virtual heart like a balloon.

The team of five students — I spoke to two, Dustin Stephan and Ruili Tang — built the experience using the HTC Vive virtual reality headset. As they watch the participants explore their VR world, it’s hard not to tell them where to go or what to do. They have to let participants explore on their own and be a “naive guest,” or someone going in blind and figuring things out for themselves.

The experience looked fun and, at times, got some laughs, too. The students seemed to want participants to enjoy themselves. They built a whole set piece where people could stick their heads through empty painting frames and take photos of themselves — perfect for “American Gothic” selfies.

3. Althea — a game about collaboration and emotion

Walking into the room for Althea was like entering a magic forest: complete with purple lights strung on set pieces of trees, fluttering butterflies projected on a wall, and calming music.

That’s because Althea is a two-player VR game using the Oculus Rift headset that tries to generate an emotional experience. It’s all about collaboration, and some puzzles can only be solved if the two players work together. 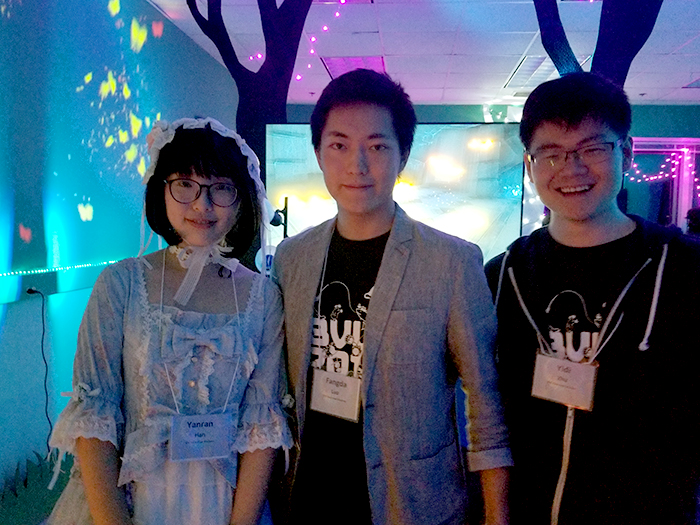 I talked to a few of the students on the team — Yidi Zhu, Fangda Luo, and Yanran Han — who told me that they wanted to make a “visually astounding” game where two people could connect and strengthen their relationship. They hoped it made the players feel like they need each other.

That sense of collaboration was strong within their creative team, which consisted — like many of the other groups at the festival — of programmers, artists, and a sound designer. They found that their team size was great for bouncing ideas around. Two programmers could talk and work together, for example.

Considering their game was one of about 17 chosen for the festival, out of roughly 80 the students in the Building Virtual Worlds program created, I’d say they collaborated pretty darn well.

In addition to creations from Building Virtual Worlds, about a dozen or so other projects were on display at the festival. One of those was CurioSer, a VR computer science education game about creating pizzas in outer space.

CurioSer uses the VR platform Google Daydream. The project is backed by Alice, a company that makes a block-based programming environment that’s used in classrooms and for after-school programs. According to the students I spoke to (the team includes Daniel Cohen, Griva Patel, Le Ma, Matt Stone, Mengyang Li, and Sunil Nayak), ETC projects can either be assigned by the faculty or by an industry client. The degree of collaboration varies. Some clients are hands-on and tell students what they want while others have a clear idea in their head and try to guide students toward it. Every step is a part of the learning process, and the advice is invaluable. 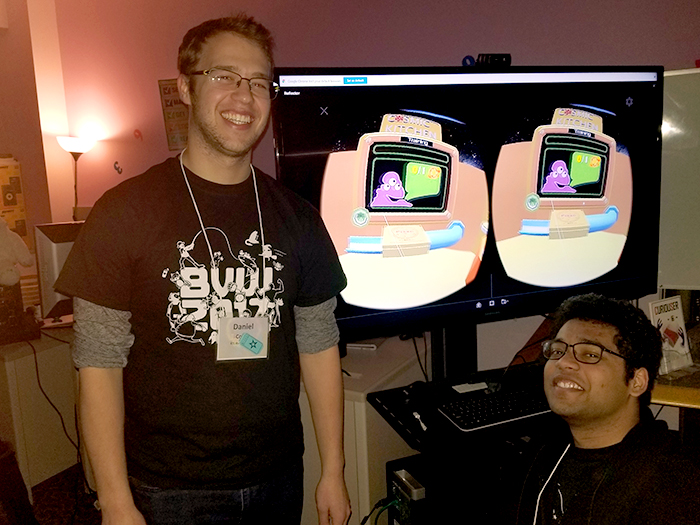 The team told me that CurioSer teaches students the value of using functions in coding. Playtesting is a big part of ETC projects, as is credible research, and the teachers they surveyed said that one of the biggest pain points was getting students to use functions because they didn’t understand why they should.

CurioSer addresses that challenge by having players make pizzas. At first it’s a tedious process, but the “Celestial Function Builder” — the game’s metaphor for functions in coding — makes it a lot easier by introducing pre-made pizzas. The result is that it’s a lot easier and faster to make those pizzas rather than always hand-crafting them, and students start to understand that and make the connection to the lesson as they play. With functions, the difference is five lines of code versus 50 lines of code.

5. Flower Power — a game about ecology and conservation

Not all the creations at the ETC Festival used virtual reality as the prime technology. The Flower Power project used iPads. Which is good, considering tablets are more likely to show up in elementary school classrooms.

Flower Power (also called “Trash Traders” and “Eco Heroes” — the team hasn’t quite settled on a name yet) aims to teach 4th and 5th graders about sustainable, green living. Players work together on four iPads to sort different materials into the right categories for recycling or decide whether it should go into a compost. 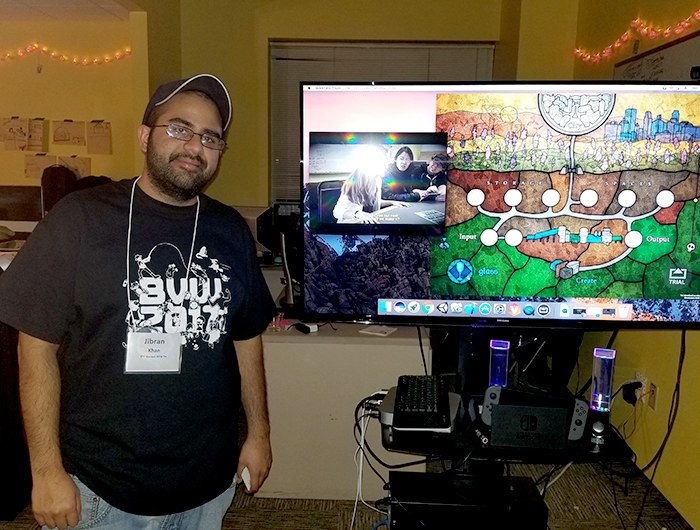 The client for the project was a green club in West Virginia, said one of the project producers, Kacey Eichen (the team included Eichen, Mai Ao, Longyi Cheng, Jibran Khan, Jacob Rosenbloom, and Zhenhao Joe Xiong). They had a lot of input. But a lot of what ended up in the game came from students in the classroom, too.

At first, the kids weren’t talking — not a great sign for a game that’s about communicating and strategizing. But that changed when they ended up in groups where there was more team members than iPads.

The kids started to form roles. One person would manage a different type of material — paper, glass, plastic, and metal — and another would go between the “towns” (groups) and negotiate the trade of materials. That person became the “ambassador,” as it’s called in the game now. Kids really enjoyed the process of sorting materials, Eichen said, so that became a big focus, too.

It’s a lot of fun, messy chaos for an elementary school classroom, with kids running back and forth between different teams and shouting that they need materials. But it’s “chaos they are learning in,” Eichen said.