Join us for The Great Exchange: Student Engagement Summit

"The education crisis is a crisis of engagement," said Shawn Young, Classcraft co-founder and CEO. "It has a profound impact on everything from mental health, social emotional learning, and academic performance to school climate and attendance and suspension rates. Our EMS helps school leadership make informed decisions about their students to measure how they're progressing over time, using real and actionable data, and to determine whether their efforts around programs and initiatives are effective."

The EMS leverages both API integrations with key partners and Classcraft's revolutionary School Climate Index, or deep analytics that measure school climate based on various measurements, which is a part of the suite of administrative tools provided to principals and district administrators when launching Classcraft at their school. The School Climate Index helps schools using Classcraft to combat issues like bullying and violence or difficulties around teaching social emotional skills (SEL).

"We're thrilled to be collaborating with the great minds at LRNG, Newsela, and Breakout Edu for the launch of our Quests Marketplace," said Devin Young, Classcraft co-founder and president. "Since its release, our Quests feature has resulted in over 85 000 original lessons from teachers and over 3 million student assignments completed. The Marketplace opens up a whole new possibility for our community to share and discover unique gamified content from other teachers and some of the most innovative companies in education."

"We are excited and honored to join the Classcraft team and their partners in the Quests Marketplace." said Connie Yowell, CEO of LRNG by Collective Shift. "We know that all our students deserve access to high quality and highly engaging learning experiences. The Quests Marketplace delivers this at scale, while supporting amazing teachers to put our students on paths to success."

In Classcraft, students create a character — a Warrior, Mage, or Healer — and gain or lose points for their classroom behavior and performance. By earning points, students "level up," enabling them to earn "powers" that provide them real benefits, such as getting extra time on an exam or being able to eat in class. They can also use these powers to help their teammates, which promotes collaboration. Over time, Classcraft rewires social dynamics to facilitate a supportive environment where students thrive.

Classcraft is used in over 75 countries, including over 160,000 classrooms in the U.S., and has over 4 million users around the world. It's being used from elementary school to university, in every subject and 11 languages.

Classcraft will be on-site at the ISTE 2018 conference. For more info, [email protected]

Classcraft is a Quebec- and New York City-based education technology company that uses gaming principles to address student motivation. By blending students' physical and virtual learning, the program reframes their progress in school as a game they play together. Using collaboration and play to build more empathetic and fun classroom culture, the game rewires existing social dynamics and facilitates a supportive environment where students thrive. 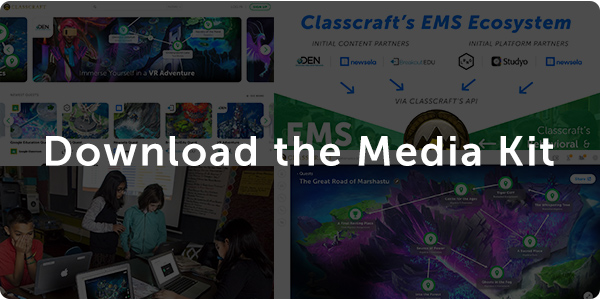