At the “How Teachers Use Games in the Classroom” panel at Games for Change 2017, a group of innovative educators and school administrators shared their experiences with games in their schools. 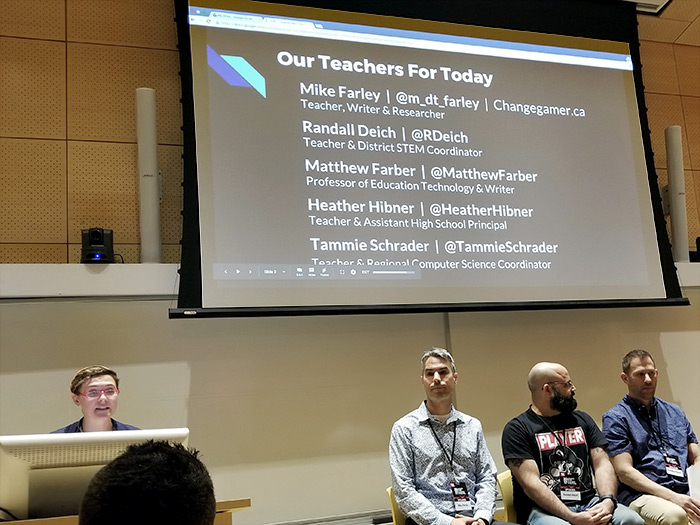 One of the 35 digital games available is Stop Disasters, a game that looks at the Indian Ocean tsunami and the tsunami that hit Japan in 2011 and then questions why more people perished in the first than the latter. It’s learning with a real-world context.

The games come with recommendations for scaffolding and free student activities, and they cover subjects such as energy and climate change, politics, economics, history, science, and more. When the games are played in the classroom, it results in teacher-led research with students, Farley said.

Even game design is possible “without a lot of information or training” on the teacher’s behalf. By creating games, students gain a deeper understanding of the issue or topic they’re studying. 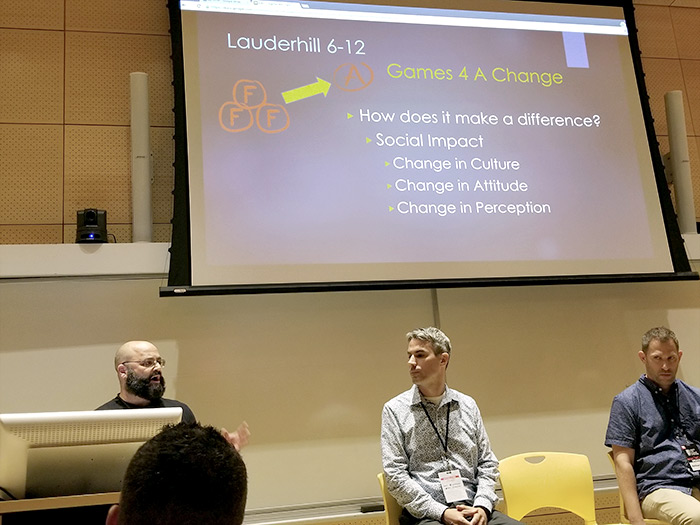 Randall Deich, a teacher and district STEM coordinator for Lauderhill 6-12, spent a lot of his high school years in game arcades. But that time paid off as Deich is now helping a new generation of students make huge social impact.

Deich said he follows a “let’s learn not just to consume but to produce” mantra that he imparts to his students. They’re now winning first-place prizes for games they’re creating, presenting to local business, receiving entrepreneurial mentorship, and earning recognition at a national level. Seventh graders are going to companies like American Express and getting feedback for a day.

Some of Lauderhill’s students created Happy Help Hub, a website that helps teens with bullying, stress, mental health, or even homework. “Our social impact for games was taking our audience of our students and presenting them to the globe as game developers,” Deich said. 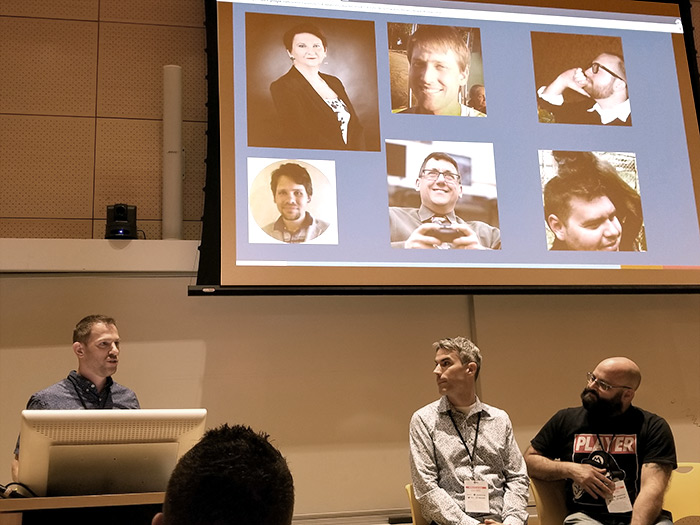 Matthew Farber, an assistant professor at the University of Northern Colorado, says that students should never be staring at screens while the teacher is doing all the teaching. Game-based learning should happen in action.

Educators aren’t teaching in a vacuum; they’re sharing with one another. And expert educators “twist” games so that they have a purpose. They don’t just use them out of the box. Farber cited one example where a colleague used the game Her Story to teach unreliable narrators.

These “expert educators,” as he called them, don’t use dashboards premade for them. They “go where the game takes” them. They teach with a game, like DragonBox Algebra, and then with something in the real world, like real algebra, and they discuss in the middle. They have students reflect on their actions, and most importantly, their classrooms are playful.

“All the teachers are gameful,” Farber said. They also aren’t afraid to change their roles. For example, Farber’s colleague Steve Isaacs pretends his class is running a game studio. 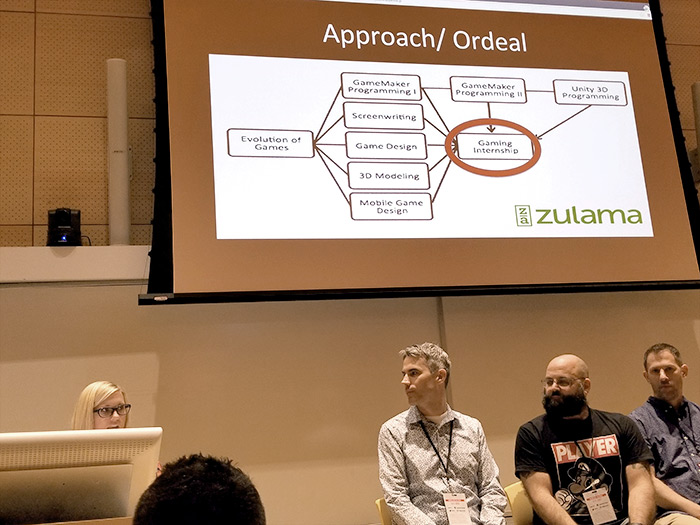 Elizabeth Forward School District’s Heather Hibner has been a school administrator going on five years, and before that, she spent 11 years in the classroom. During that time, she realized something needed to change: their course program and district culture, which has since followed a Hero’s Journey path and integrated gaming much more broadly.

Her district’s “call to adventure” began with an awareness of a necessity for change. Their students weren’t choosing classes, and as a result, they weren’t filling up. The classes they did offer were “archaic and under-serving,” she said, instructing them on how to create PowerPoints or type on a keyboard. A drastic change was needed for the district to survive.

What happened next was a lot of innovation: physically redesigned classrooms with no teacher desks (“The space is essential to what we do,” Hibner said), a switch from teacher-centered to student-centered learning, gaming internship classes, and more. They wanted students to progress organically.

It’s been a learning process for Elizabeth Forward School District, with a mix of successes (a risk-taking environment, engaged students, and so on) and challenges (matriculation to internship/sustainability, for example), but overall it’s been a huge win for what was a struggling district.

5. Tammie Schrader — Gaming in schools can work on a large scale 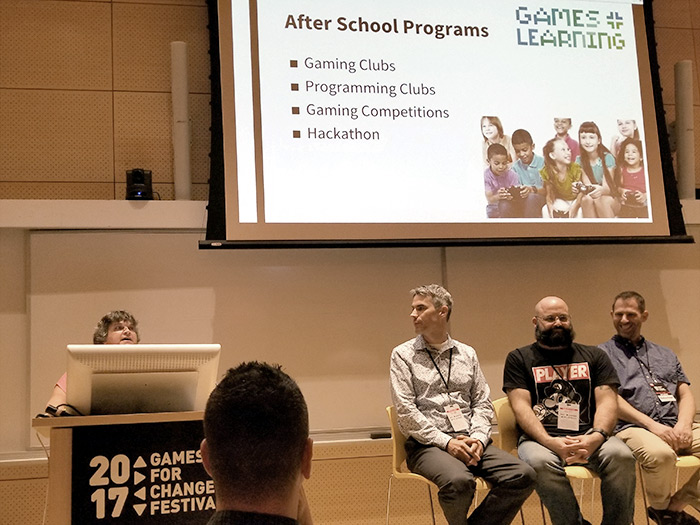 Before Schrader became the computer science coordinator for Northeast Washington Education Service District 101, she taught middle schoolers. But games were never allowed in her home. Her attitude toward them changed when a 7th grade student gave her a thumb drive with his project on plant identification — he’d hacked into Mario.

Every kid wanted to come in and play his game, so she knew that games had potential in education. But she was a little nervous when she got asked to roll out gaming to a whopping 59 districts.

Teachers want to do something fun, Schrader said, but they don’t know where to start. Part of her job involved developing a model that could work with gaming for elementary, middle, and high schools. She created professional development plans for individual teachers, classrooms, and administration. Having the right tech support was essential, too.

Her district made after-school programs and did game jams, got companies involved, and appealed to the community and parents for support that admins couldn’t ignore. This year, they put on Spokathon 2017, a 24-hour hack-a-thon for high schoolers. Real computer programmers came and helped the students all night, and they secured funding from organizations like the Hagan Foundation and College Spark.

And it all started with awareness. “Without great leadership, some of our work wouldn’t move forward,” Schrader said.

Teachers will pay for something that works well and fits into what they’re doing, she added. Free doesn’t mean it’s great for kids. “The key is to make a great game and find a way to get it funded [for the school],” Schrader said.