Now you can teach your students to be real-world citizen scientists with a game that helps Alzheimer’s researchers better understand how treatment can reverse memory loss. 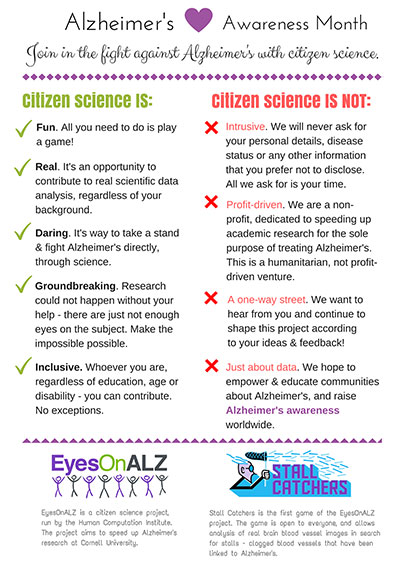 Stall Catchers is a free online game where players of any age — including students as young as 7, for example — can join investigative efforts and speed up the lab research around Alzheimer’s disease. “Citizen science,” a form of knowledge crowdsourcing, can help lead to an effective treatment in years as opposed to decades. And this isn’t the first time that games have been used in the fight against major disease. Sea Hero Quest is a mobile game where anyone can help scientists better understand dementia.

According to Wired, it’s already working: Stall Catchers players have helped determine that “stalls,” or cut-offs in cerebral blood flow, are not associated with amyloid plaques. This finding helps the researchers at Cornell University better direct their work into treatment options.

The game works by fast-tracking a labor-intensive part of Alzheimer’s research — one that involves around tens of thousands of mice brain scan images to be examined for stalls, indicated by small black spots (or “stuck stripes”). Players essentially “vote” when they identify a stall, and these are counted in a weighed system to determine an accurate, credible verdict. A week of lab work can be done in a single hour.

The end goal is to develop a drug that address this problem without compromising the patient’s immune system. In its first five months, Stall Catchers saw over 3,000 people participating. A teacher from Lake Hazel Middle School in Idaho got 240 students to play — and yes, they’ve cracked the leaderboard’s top 50 (stall catches earn you points). Any student can play by registering for a username or by using an existing Google or Facebook account.

To learn more about the science and research behind Stall Catchers, you can visit the EyesonALZ website or read this article from Discover Magazine.