A lot of teachers worry about budget. How can we make sure that more teachers and students have access to VR?

Magiera: VR is episodic. It’s something that you use as a tool every once in a while. Jonathan Rochelle from Google in the panel said that they very purposefully didn’t put head straps on the Cardboard. A lot of kids want it because they’re like, “My hands hurt!”, but they feel like it’s not something where you strap it on and you’re in VR all day, every day. It’s supposed to be, I’m learning about the Grand Canyon, let me take a tour around it to get perspective, let me look something up on my computer, let me get an actual physical atlas, let me write about it. So it’s a tool amongst a myriad of tools to understand various concepts.

With that said, because it’s a tool amongst many tools, it can be shared. In our district, we have about 13 kits across our 11 buildings, and they check [the devices] out. We have a Google Form where they submit what their lesson is going to be the day they want to bring VR into their lesson; how they’re going to use it; their planning before, during, and after VR; and a Google Calendar where we can say, all right, fifth grade, this teacher’s going to use it on Monday from 3 to 4. This teacher’s going to use it during school from 1 to 2. This teacher’s going to use it for her entire morning block. So we’re using the same kit throughout the day rather than buying a kit for every single classroom, which is usually the model for technology—every classroom gets a SmartBoard, every kid gets a laptop, every kid gets an iPad. I think VR is a tool that you’d use, so it’s something that can be shared across many classrooms. 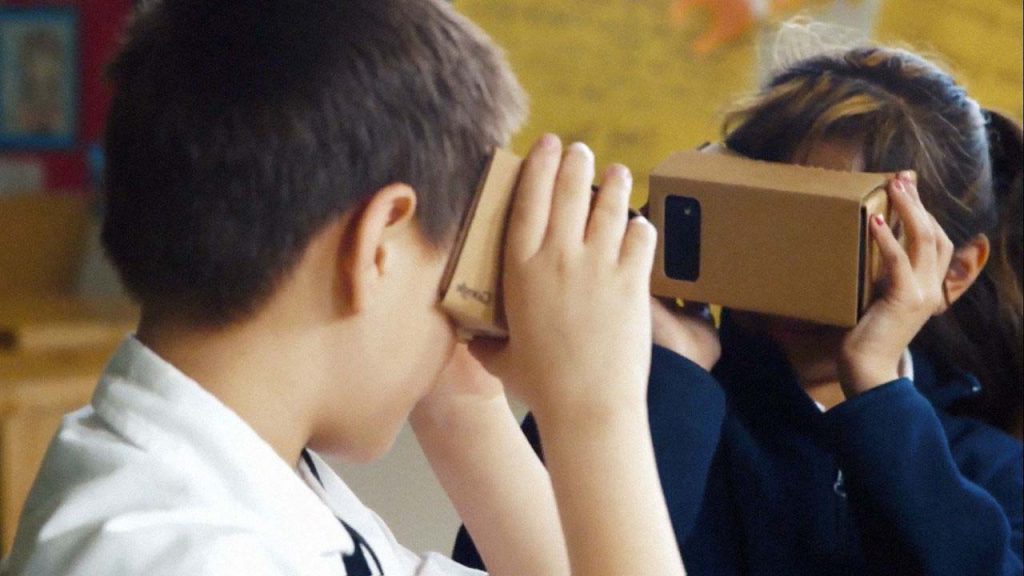 So it’s not replacing the classroom experience, which is a concern that some teachers have. There’s also the concern that VR would isolate students from real-world experiences. How would you address those concerns?

Magiera: If technology is used well, it enhances relationships and understanding of the real world rather than replacing it. It is a fine line we need to balance, and people are afraid of screen time. One example, not specifically with VR, but I think is going to happen, is when we first brought iPads into our fifth grade classroom. We did a lot of videoconferencing and cross-school blogging and created a lot of empathy from my students to students even halfway across the city of Chicago. My kids are on the south side, they were living in the Chicago Housing Authority, which people call the projects, and they didn’t have the same experience that the students on the north side and Lincoln Park had.

And when the school shooting in Connecticut happened, it impacted every school. Everyone was trying to look at safety and gun control and how we’re supporting our kids to make good choices in school, understand what to do if something bad happens, keep them safe in a terrible circumstance … and we were having a lot of safety drills. We ended up having a Google Hangout with a school on the north side, talking about guns and kids and what should happen. And they have really differing perspectives, because students on the north side were like, “Anti-guns forever. I’ve never seen a gun, I’ve never touched a gun, they’re scary.” Kids in my area were like, “We’ve seen guns. My dad has a gun. I’ve seen guns in games. I know someone who’s been shot in my family.” And we had another Google Hangout with kids in northern central Maine, who said, “We use guns to eat. Our high school has a hunting class. My brother has a rifle, and I’ve been hunting with my dad since I was a kid.” They don’t see guns as a violent thing but as a tool to put food on the table. So it created this really robust conversation about morality, ethics, tools, gun control … We looked at the Constitution, we looked at the right to bear arms.

It was this really powerful conversation where they were tapping into what it means to be a citizen, to be a child, to be a human being, and technology allowed that to happen. It’s different from plugging our kids in and having them watch videos for six hours. It’s enhancing that human interaction, and I think VR can do that as well because recently we had a group of teachers from Iceland come to visit us. The students put in Iceland, the Google Expedition, and the teachers from Iceland were sitting with the kids saying, “OK, here’s what you’re going to look at.”

The kids would take a minute or two to look, then they’d put the VR down and have a robust conversation with the teachers from Iceland asking them questions, how they stay warm, what their kids do, if they get to go sledding during recess, and really having that human connection. If used well, if used for good and not evil, technology can increase human interaction. But again, we have to be thoughtful about it. 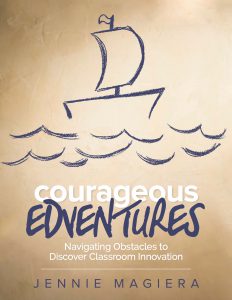 Can you tell us about your upcoming book?

Magiera: Absolutely! I’m so pumped. I’m finishing today the line edits for my first book, it’s called Courageous Edventures. It’s written because as both a classroom teacher and then a district coordinator, technology coach, and now a CTO, I feel like there’s a lot of really great books out there around innovation and digital learning. But they seem like they’re geared around early adopters or early innovators, the folks who want to try the next 1 percent effort and transform the world and are already drinking the Kool-Aid. Or for the people who are the late adopters who are really scared and it’s really low level, like, here’s how you turn on a computer, step one, hit play—and not a lot about pedagogy.

So I wanted to write a book that was not about tools but about classroom teaching and learning, or pedagogy, and with tool agnostics. So it’s not a book that is written about a specific tool or app or program that in a year will be outdated because that program or app either doesn’t exist or is completely different in interface. It’s about how you think differently in the classroom and how you overcome obstacles.

It’s meant for that middle 68 percent of teachers who want to try but aren’t sure how to start and what to do. And it’s about addressing directly the problem of when someone starts to innovate or transform the classroom—so, I don’t have the tools, I don’t have the time, this isn’t working, I’m afraid. I have to differentiate for 34 kids but I only have 32 minutes to teach math every day. Actual problems that teachers face every day. How do you use technology to solve those problems so you can see tangible impact immediately in your classroom? And then how do you go from there to get from that 1 percent of transformation, that big, hurt-your-head, change-the-world type teaching and learning, but first overcoming all those daily obstacles and headaches.

So it’s written for either the teacher who wants to transform their classroom and doesn’t know where to start, but it’s also written for a coach, a CTO, a school principal, a building or district leader who says, “I want to move the entire bell curve of my teachers down the innovation axis. How do I get at that larger percentage of my population?” And the book is also written to help them coach their colleagues.

The book Courageous Edadventures releases September 20 and is available for pre-sale now. For more of Magiera’s thoughts and projects, visit her blog, Teaching Like It’s 2999.