Finally, there’s an MMO designed from the ground up to be educational.

Tyto Online is the new massively multiplayer online role-playing game (MMORPG) from Immersed Games, a developer with only about 20 people. Its CEO is Lindsey Tropf, whose background in education and school psychology—as well as data-based decision-making for teachers and schools—makes her the perfect person to build a game world that assists student learning.

Tropf’s experience has helped her think about Tyto Online and what it can do from many perspectives, including social-emotional learning.

We spoke to Tropf about Tyto Online, which is available for PC and Mac, and how it teaches kids about important STEM concepts.

What inspired you to make Tyto Online, and why focus on ecology? 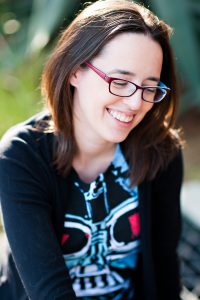 Lindsey Tropf: Tyto Online was inspired originally from playing World of Warcraft. Of course. [Laughs] It was actually many years ago that I was playing World of Warcraft and just realized one day the absurd amount of information that you learn from playing games like that. The thousands of items and boss strategies and world lore and everything else. It’s just that the content itself wasn’t really meaningful outside the game world. I definitely learned a lot about problem-solving, working with others, leading raids, and that sort of thing, and for me there didn’t seem to be any reason why we couldn’t do that while actually learning STEM and science content and things like that, too.

I went into a PhD program then in education school psychology, and as I kept learning more and more about ideal learning models and how we learn, it always linked back to those experiences and these online games and these collaborative communities that you learn so deeply in. I assumed that [something like] this had to have existed, and I decided I wanted to go find something and study it as a professor, and when I looked around I realized it didn’t. So I had to learn a lot to figure out how to run a game company and develop video games and raise money and do everything else, but I just started jumping in and learning that. 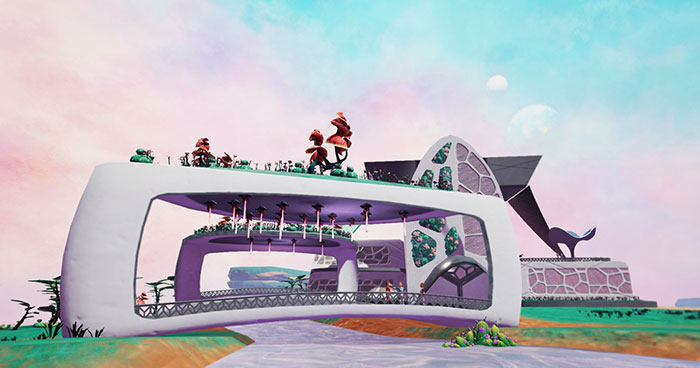 We were trying to decide what to do first. The long-term goal is to teach many subjects. For ecology, it was something that was intuitively really fun in terms of kids and us as a team really loving animals. I had an awesome teacher who has a Master’s in zoology and is a gamer who was willing to consult with us, so it seemed like a natural fit for us to dive in and do something that was fun like that for our first module.

But our long-term goal is to definitely expand from there and have this one single game world with many subjects that you can explore and learn. Science was a really good starting point for STEM needs, and there’s so much you have to learn about systems and science, so it seemed well-suited to being a video game.

What are the different concepts you teach in the game?

Tropf: So right now our first module is ecology. Our content is aligned with next-gen science standards ecology for middle schoolers. Each module has a set of quests and a learning sandbox.

The quests are based on inquiry-based science, active-constructivist learning, those types of theories. For example, we have an invasive species chain where the student starts out by being introduced to these pineapples popping up in the ecosystem on our alien planet. So not something that’s normally there. We think they might be invasive or just [increasing] on their own, we’re not really sure, so we need evidence to prove it. 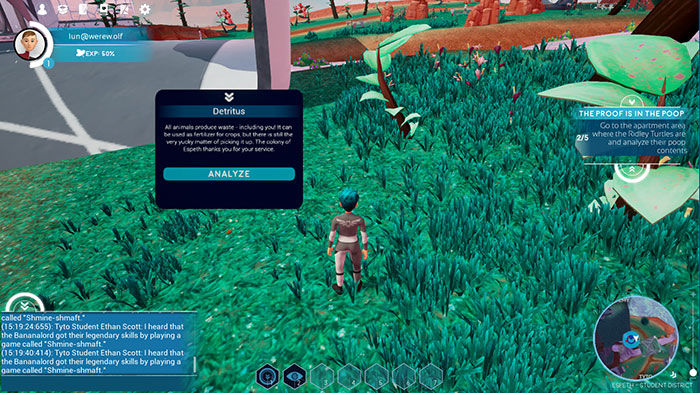 Players go around, they collect poop samples, and they see that there’s more pineapple seeds in the poop than there are these native plant seeds. It seems that the pineapples are being eaten over the native plant, so that might be a problem. Then they go out and do something called observation, which essentially is for a detective-style quest. They go into the game world and find different pieces of evidence, and it fills up their evidence log, which they use to make an argument. They form an argument that says, “The population is going up while this is going down, and pineapples are being eaten over the native plant, therefore it’s not reproducing as much.” So they form this argument, decide if it’s an invasive species, and play that against a [non-playable character, or NPC] to try to fill up their “convince-o” meter. Once they convince them and determine that it is invasive, in this case, they get a follow-up quest to go transplant them out and remove them from the ecosystem. It leads you through the inquiry-based science process.

… As players do their quest, they’re leveling up their ecology XP. They level up and get points to unlock animals to create their own ecosystem. That’s our progression reward, and then there are more open applications that are more experimental. They build ecosystems. We have five biomes they can do. We have Mojave Desert, Amazon Rainforest, Great Plains Grassland, Alaskan Tundra, and Himalayan Forest. They do quests in our alien ecosystems so we can be really absurd and abstract, but they also do quests in each of these biodomes. 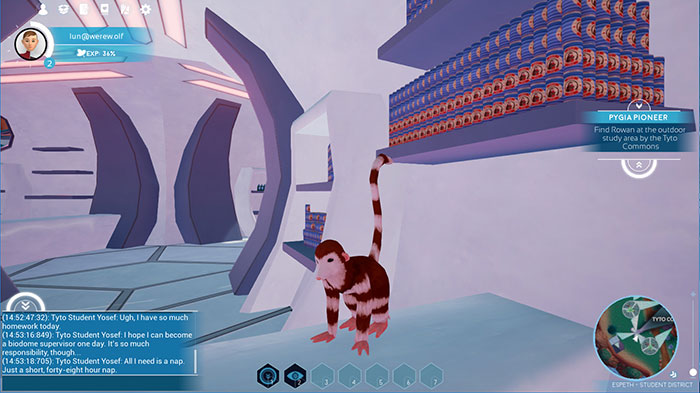 So it’s part of the lore and the story that we’re on this alien planet in the future, and these are the last surviving [flora and fauna] from Earth, and we’re keeping them safe in these biodomes and studying them while you’re helping out the scientists. You also build your own simulation versions to study and try to understand these ecosystems as well. As you do quests, you unlock more and get to bigger [sections] and the apex predators and so forth as you learn.

How do you integrate social-emotional learning and research into the game?

Tropf: One of the quests is a gratitude quest. There’s research that says if children log things they’re thankful for once a week, they become more optimistic and happy, and who doesn’t want that?

Because we’ll have students playing this game … they’re going and doing different quests in order to earn rewards and build up their character. So we can put in cool, broad research like on happiness in so it can become a whole-child experience and not only just about ecology. 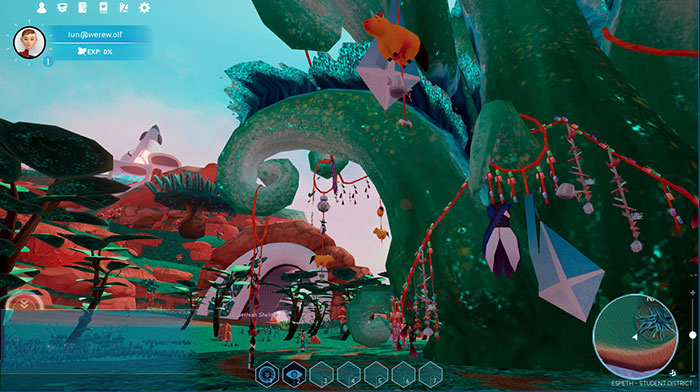 We have this whole story thing. We have this big tree called the Nandri Tree that has all these objects hanging from it, and the lore is that people hang what they’re thankful for on it and fill out cards and say what they’re thankful for. So that’s a weekly quest that the kids can repeat, they go and create a thankfulness card. And that way we’re able to reward them for doing that as well.

We’re really excited about things like that that we can integrate. As we discover new research, especially that are pretty simple to build, [we can] use that opportunity that we have of kids playing our game to do lots of positive impact.

What’s the difference between Tyto Online and Tyto Ecology?

Tropf: Tyto Ecology is the sandbox as an offline single-player game. Being a first-time game studio and my background of having never made a game before, when I went and talked to a bunch of people at Electronic Arts and Zynga and stuff and said I’m going to build this massive education MMO, they all said I was crazy. And they were right. [Laughs]

So we decided to take a little of our gameplay out of it and do it as its own thing first. In April 2016, we launched Tyto Ecology. We’ve been updating that and learning from that experience, having made our mistakes there with our code and everything. 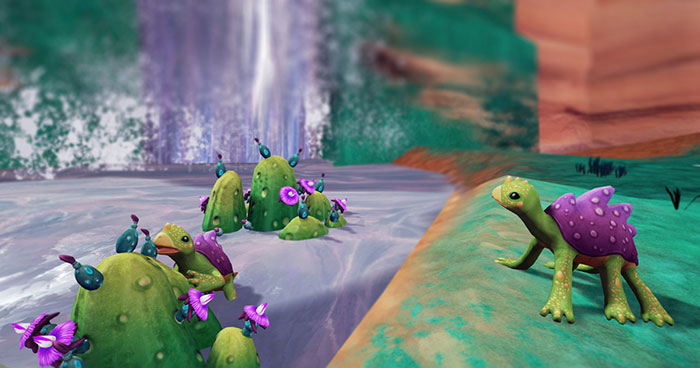 We then made Tyto Online. Tyto Ecology as the build-your-own-ecosystem is being rebuilt, and we’re now wrapping that up into Tyto Online.

Players enroll in Tyto Academy. What’s different about this school that’s going to make players want to be there, versus them seeing this as a virtual version of where they go every weekday?

Tropf: Tyto Academy is really just this concept that you’re part of a group there. We have an academy that is actually just a landmark. You can’t go into it, and you don’t do anything with the school. It’s just the lore of the story that you got recruited into Tyto Academy. You wake up from cryo-sleep, and you learn about that a little bit.

But what kids are actually doing is fieldwork, and they’re out solving problems in the ecosystems and community. Eventually we’ll build an inside to the academy, but it’s probably going to be somewhere you go to get a quest. Nobody wants a game where they sit in a classroom.

At the moment, how many hours can this be played for?

Tropf: Now that the build-your-own-ecosystem stuff is in, it’s pretty unlimited because that’s a sandbox. But in terms of the straight gameplay of quests and stuff, I think it’s probably depending on the speed, three to five hours. 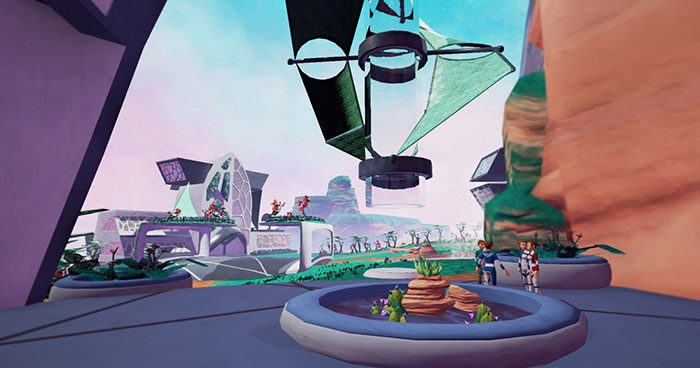 … There’s about 40 ecology quests, and they take between five and 15 minutes each. Some of them are chains that we treat as one single quest so you don’t lose track of what you’re learning. Some of them can be pretty long as you work through all of that content.

With the create-your-own-ecosystem, it depends on how into it people get. At the very least, people should play that for at least five to 10 hours to really get the concepts and learn and be able to build that up to their apex. We have people who hit 100 hours the first month, just building an ecosystem.

Can you talk about the learning dashboard?

Tropf: We built a learning dashboard, which is as the kids plays the game, it’s populating what quests they’ve done and what they’ve learned from it so parents can see what they learned and track that.

There’s also a set of suggested activities so that after they learn about invasive species, we can pop up and say, here are your resources for how you can identify invasive species in your community and cool things like that. Just a way to make sure that people are making real-life connections from the game. 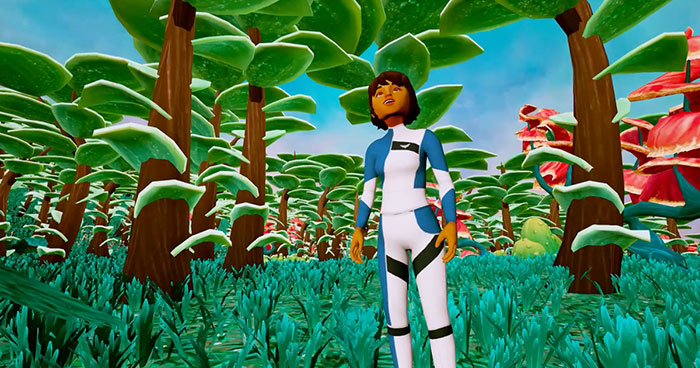 It’s something that we’re mainly targeting it toward parents. … In the future, we definitely plan on making it more of a community feed for the kids to learn. It’ll also include the achievements and what their friends are up to, so we can encourage them to engage with it.

The developers of Tyto Online are looking for feedback from teachers on what the developers can do to make sure the game can be used in the classroom. They’ve put up a survey, and for any teacher who completes it with a valid school email address, they will send a classroom pack of 30 trial accounts that will be active until the end of June—you could use these in the classroom or just give them to students. Either way, that will provide even more feedback and data that the developers can use to improve the game!