Hip Hop Education has become an ever-growing popular movement today, especially due to its cultural relevance and its tendency to promote—through its connection with students—an increased social and political awareness in an academic setting.

Simply put, hip hop in the classroom is the use of hip hop culture, especially rap songs and lyrics, as classroom content—both in the creation of material to learn and in the delivery of existing material.

#HipHopEd even thrives on Twitter weekly, with the movement inspiring teachers and students alike.

From the 1970s to today, there is no denying the pervasiveness of hip hop in today’s youth culture. While it has been present and even popular for decades, with hip hop figures represented among different generations, hip hop culture has always—even as it has aged and matured—had an association with the youth of today. This in itself is an anomaly; how can something be about and in response to historical events, political climates, and even living conditions without dating itself? 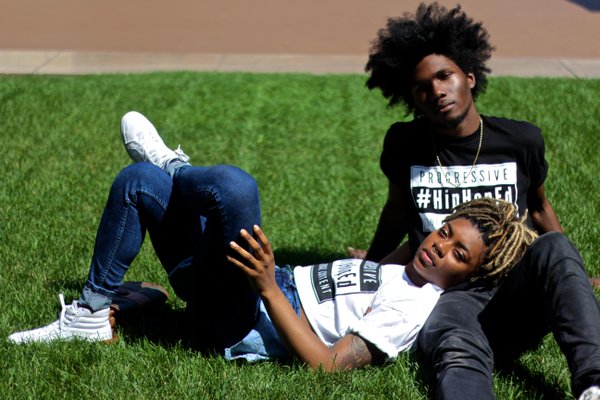 The answer lies in hip hop music’s close connection to hip hop culture and in its ability to maintain a strong connection with its practitioners and fan base despite any shifts in technique, medium, or content. At the center of hip hop culture is something universal and integral to human nature: oral tradition. It’s a medium of catharsis and expression coming together and being spat out in the exact way it is meant, there to be admired for what makes it art—and especially for what makes it “ugly” to some listeners.

This steady relation to youth is a no-brainer as a way to connect with young students. It’s important not only to art but also history and even contemporary life. Most importantly, hip hop in education is a powerful way to teach students the skills they need to help themselves, at school and at home.

The academic world tends to recoil in response to any connection to hip hop culture. It’s uneducated, one might think; it’s not socially appropriate and promotes destructive behavior. In an essay accusing hip hop of destroying the “potential of black youth,” Jeffrey Hicks states that “hip-hop culture deadens the drive toward civility and legitimizes backwardness.” However, using hip hop in the classroom doesn’t mean I am turning a blind eye to all of the things that can make its presence in the classroom uncomfortable (although I do disagree with this “evil” portrayal). In fact, you should use hip hop especially if you’re not comfortable with it! 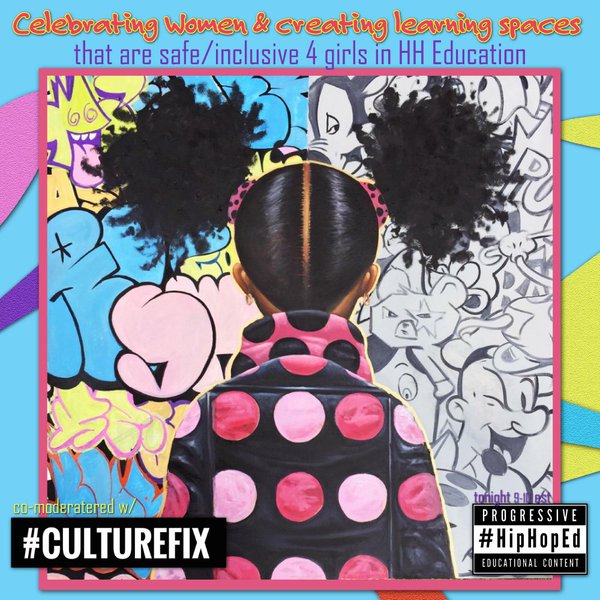 First of all, actions speak louder than words. Using hip hop in the classroom is an action that has a huge effect on what students receive from you. They see you reaching into a world that they are familiar with instead of pulling them into your world. They see you playing and engaging with them instead of retreating in fear. Not only may you accidentally show them another thing to value about your curriculum, but even the mere attempt to connect is so visible that it can’t be ignored. Whether you mean it to or not, you are showing respect for something that is theirs in your classroom.

Every teacher knows and acknowledges that there are actions, items, and concepts that are inappropriate for a classroom setting. What this can sometimes manifest as, however, is an environment in firm denial of the existence of anything “inappropriate.” The class becomes a “safe space” but then morphs into a bubble of disrespect, teaching students to look down on any other environment not mirroring the same ideals. If you instead show them the relevance of what they’re learning in the context of the culture they themselves appropriate, you are doing something incredibly important by example.

Hip hop forces discussion about race, poverty, identity, family, hate, and the Man—all of which are things students worry about daily when they’re supposed to be thinking about your step-by-step tutorial on Shakespearean sonnets. You have an opportunity with hip hop to acknowledge pain, hate, anger, and injustice instead of denying it and further losing respect from students, who go home to these real issues and face them instead of your homework. You can show them through hip hop staples (rhyme, repetition, storytelling, catharsis, reflection) how to handle these issues and even use them to navigate another discomfort: your academic world.

Another thing that lends hip hop culture well to a classroom atmosphere is its intolerance for silence. Hip hop is about taking life’s problems and putting them “on blast,” whether it’s coming up with solutions or even just spreading awareness of the issue. Subscribers to hip hop may profess that “snitches get stitches,” but the truth is that hip hop culture is about snitching on life and the world.

By reflecting this “take the good, eschew the bad” ideology with your handling of hip hop, you are modeling how to take what life gives, incorporate what is useful, and filter the rest. You are showing students that the proper response to adversity is not flight, despair, or dismissal—it is action, discussion, and collaboration, all ideals heavily promoted in hip hop culture and in academia alike. 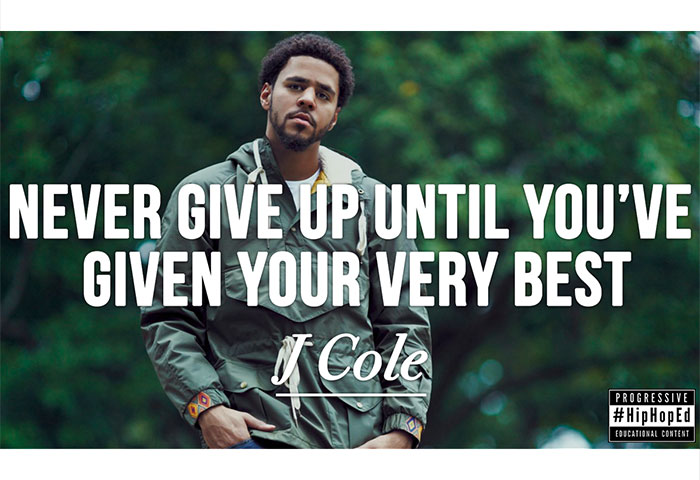 So teach a verse that helps them remember the quadratic formula, but also includes how much you hate remembering it. Have them make a diss track against whoever they think is responsible for the tragedy of Romeo and Juliet. Anger is healthy but should never be coupled with indifference; this distinction is important in discouraging destructive action versus angry expression.

In 2016, I created a unit that focused on the human reaction to times of trauma, something that a depressingly high number of students are familiar with. Framing an examination of Tim O’Brien’s The Things They Carried, students had to compare the way O’Brien and his self-named character within the story dealt with trauma, both in the depiction of himself and in the actual creation of the stories. By the end of the semester, students were examining methods of catharsis for their own lives.

Through workshops on rap, spoken word, music, and poetry, my students began addressing the ugly parts of their own lives that they were otherwise afraid to handle. The final project culminated in the performance of a finished project and a rationale that served as an explanation for their cathartic piece (and, for some, a safeguard there to assure me that my students weren’t in current danger; after all, one is bound to hear some alarming things with a project like this). 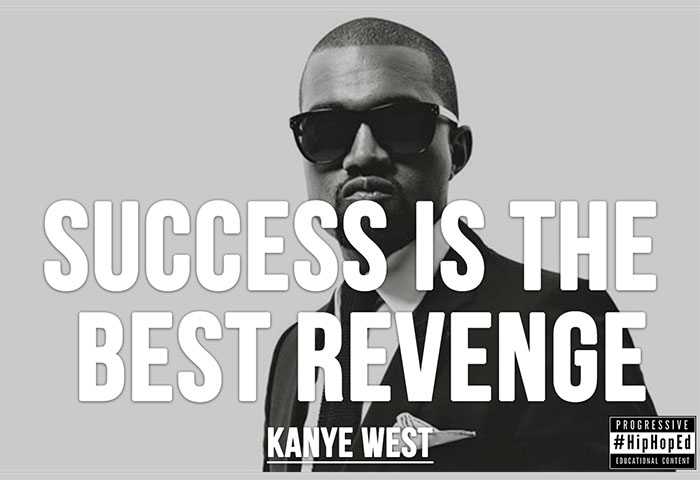 After that final project, I had students reflecting on assignments who, instead of responding with the first semester’s “I learned how to read and write better,” now wrote things like, “I learned how poetry could help me cope with my sister’s death.” I was emotionally drained, but one thing was for sure: There were some students that had needed the hip hop presence in my class to know that they could answer problems themselves.

For all of its ugliness, I felt I had brought them something through hip hop that they hadn’t gotten before and might not have had the chance to learn otherwise. I realized I had given them something integral to living and coping with life—all this through an English class.

4. You’ll teach them to overcome fear

If you are worried that the chance to express oneself will result in a wild classroom of students, then don’t you have a responsibility to go through the process of expression with them, offering constructive guidance so they don’t unleash that energy recklessly?

In other words: If you don’t teach them how to handle their own lives and cultures despite their fear, then you end up passing on something to be fearful of. What does it say if a student can handle school but not life? Why do we not want to show students where their own cultural identity fits into all this?

Hip Hop Education is a chance to engage students not only with your classwork, but with their own lives. My students had a reason to study metaphors, and they had reasons to look at how Tim O’Brien dealt with the death of his friend Kiowa—because through hip hop, these elements of English curriculum were now yielding secrets that provided clues to their own problems.

I found that hip hop didn’t just make my students care about the content; it gave me new reasons to care about it, too.