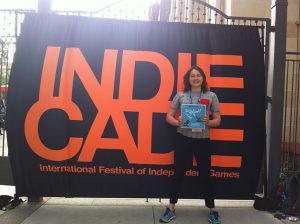 Understanding how evolutionary trees work in biology is as easy as saying, “Go fish.” Or, to be more precise, “Go extinct.” That’s the name of Ariel Marcy’s educational card game, which uses the familiar rules of Go Fish to teach science.

Marcy is a biologist and teacher with graphic and game design chops—talents she combined to make Go Extinct!. Her first game, Cancer Avenger—a free iOS game that helps students understand cell signaling and cell growth cycles—was made with the support of Stanford University’s Department of Human Biology and the Hoagland grant for Innovations in Undergraduate Teachings.

With Go Extinct (available for purchase or as a free print-and-play educator edition), she realized that evolutionary trees are basically “sets within sets”—a concept that fits well with the gameplay of the classic children’s game Go Fish. We sat down with Marcy to learn how Go Extinct works and what makes it easy to learn, fun to play, and a valuable addition to the classroom.

How do you play Go Extinct?

Ariel Marcy: Go Extinct is called Go Extinct because it’s very similar to Go Fish. But instead of collecting sets of the same number like you do in Go Fish, in Go Extinct you’re playing with a deck of animal cards and you’re trying to collect sets of closely related animals. To determine what those sets are, you have to look at an accurate evolutionary tree of land vertebrates. It’s stylized and color-coded to help you in this. These color-coded sets are what you’re trying to get. 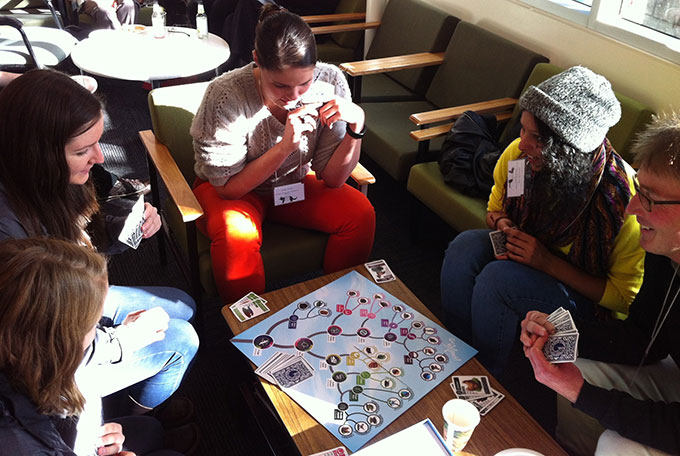 For example, to get the dinosaurs [set], you’d need the Stegosaurus, the Apatosaurus, the Majungasaurus, and the chicken. That’s one of the kids’ favorite facts is that they’ve been eating dinosaurs all this time. Aren’t they delicious? [Laughs] So if you ask for the chicken, you can do that if you’re missing the chicken, but it tells all the other players that you have those other dinosaurs. And if you don’t get the chicken, they can take them from you. So you’re giving a lot of information away as a risk. It’s slightly sneakier and safer to ask for any dinosaur, in which case the other person could give you a Stegosaurus or a chicken depending on what they have.

Where the winning strategy comes in is that if you look at the Go Extinct tree, you’ll notice you can ask for deeper common ancestors. So instead of asking for dinosaurs, you could ask for any reptile, in which case they could give you lizards, crocodile, Terosaurs, or they could give you dinosaurs. If in your hand you have some lizards and dinosaurs and maybe a Terosaur or two, the best strategy is actually to ask for any reptile. The winning strategy is the learning objective, which is looking at a relatively random group of animals in your hand and being able to use the evolutionary tree to find their common ancestor.

That’s also what makes it a fun game. There’s a meaningful choice each turn. You could ask for reptiles or you could ask for the next level up, which is Archosaurs, so it depends on what you have in your hand. To balance the strategy going deeper, if you ask for a specific animal—like the chicken—and you get it, then you get to ask again. There’s a skill component if you’re really listening closely to what other people are asking for. If you can infer what they have in their hand, then that also benefits you. That’s where the science and the game strategy interact in a way to make a really engaging game that also happens to teach.

How were teachers involved in the game’s development? 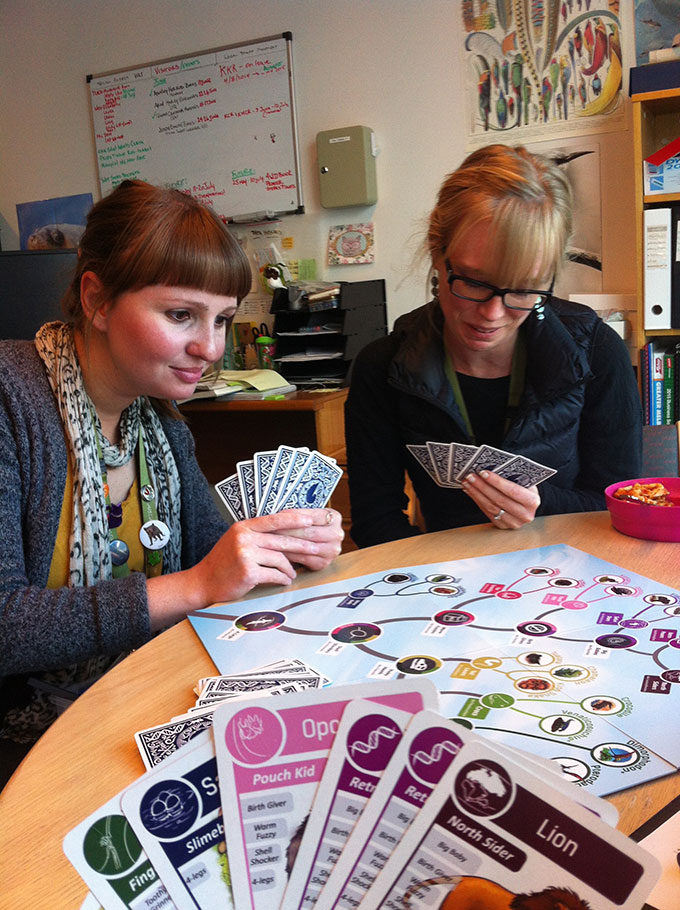 Marcy: I worked very closely with teachers from a number of different types of schools and grades as well. Part of that was figuring out how young we could go with the game. In a family setting, it works really well 8 and up. And depending how familiar kids are with games, I’ve heard of even 5 year olds playing.

At least with beginning teachers, it was easier to introduce it around 5th grade, though I’ve heard from experienced teachers that they could do it with their 3rd graders. So there was a bit of calibrating the age group with teacher feedback.

The most important thing was making the game useful to them and making sure that it addressed the standards that they’re held accountable for. In response to that, I had drafted a rather long next-generation science standards alignment document, so it shows which standards it aligns with and presents ideas on how to connect the game with further standards. And that’s something I’m continuing to iterate on with colleagues at UC Berkeley’s Think Evolution site and also the National Center for Science Education. We’re working on a set of more explicit worksheets that teachers can roll out with the game.

The next thing was making sure it was useful in terms of it not taking up too much time. I’ve gotten a lot of feedback on how to shorten the game if needed. So the game in its current form has two cards for each animal, and this makes it interesting from a teacher point of view because you often have players competing for the same clades, or groups. That does make it, the first time you play, up to a 50-minute activity. One teacher told me she just took out the extra card for each animal, and that now makes the game go in about 15-20 minutes. Which for a lot of classrooms is a much more feasible amount of time.

I would say from the outcome side, it’s been really encouraging. One of my favorite pieces of feedback from teachers has been that the game engages different kinds of students. It reaches students who they weren’t expecting to be interested in evolutionary biology because there was a game component. What’s cool is that it empowers kids who are good at games to be the teachers of their peers. One of the favorite aspects of Go Extinct that teachers like is that it’s a social-physical game that allows kids to be peer-teaching. That was feedback I didn’t quite expect and has been some of the most positive.

Did students make any connections when playing Go Extinct that surprised you?

Marcy: Yes! And some of these connections I probably shouldn’t have been surprised about, but it emphasizes a key difference between beginners and people who are more expert, in that experts have in their mind frameworks that help them understand new information. Sometimes we forget what it took to get that framework. 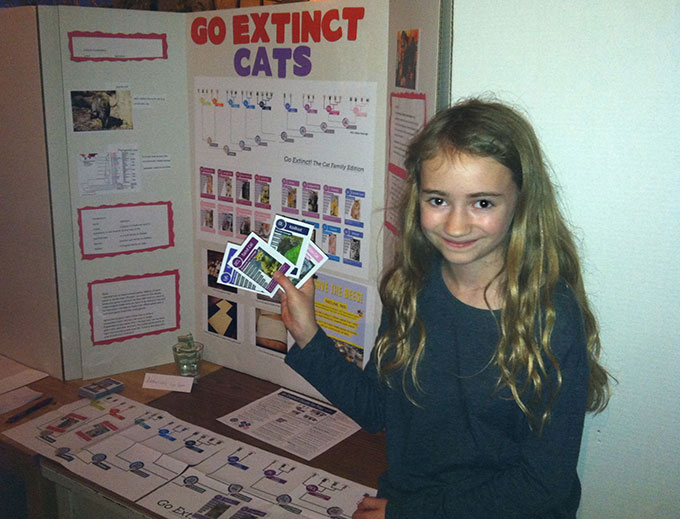 Some of the questions that I got from kids were like, “Well, wait, snakes don’t have legs anymore, so they’re not technically four legs”—all these animals are tetrapods. It reminded me that it’s not immediately obviously that because they evolved from something that used to have four legs that they’re still technically in that group. So those are the kinds of questions that reminded me of what kind of supporting information needed to go along with the game.

But there are also lots of cases, in fact probably more cases, where kids were pointing out really good design ideas that I hadn’t thought of because I was so immersed in the science. The best example of this is in earlier prototypes, I had the proper scientific names as the names that you ask for.

[Today in the game] the dinosaur group is called “terrible lizards” because that’s what dinosaur means from the Greek roots. Mammals are called “warm fuzzies” in the game because mammals regulate their temperature and have hair or fur. These nicknames are great because they add a bit of fun, asking if you have any warm fuzzies or “big babies,” which is the nickname for placental mammals.

It’s kind of funny, but it also reminds you what kind of evidence scientists use to infer these relationships. The reptiles are all called “holey heads” because they have two holes in their skull behind the eye socket, and this is a conserved traits we can see in almost all of these reptiles, and that’s very helpful. Some of the mammals are called “northsiders” because they’re diversified so rapidly that we actually infer these relationships based on the geography of where their fossils are found. … It’s highlighting those key pieces of evidence that include physical traits, fossils, and DNA. 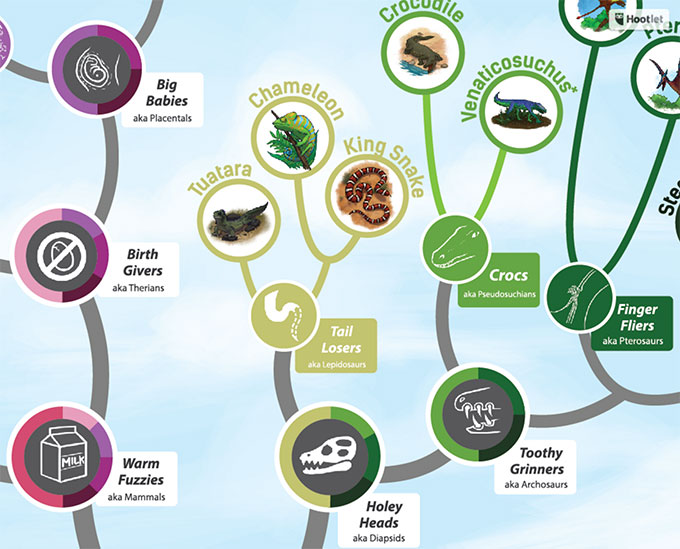 That’s where the nicknames are a great example of something games can do that add delight and also increase learning. But me being such a scientist, I had just put the proper scientific names on there. And a 7th grader told me, “We can’t say some of these words. You should give them cool nicknames.” And I was like, oh my goodness! Scientific names are nicknames, they’re just in Latin and therefore obscure. We should just give them English nicknames inspired from the scientific names.

That’s an example of how kids are actually amazing creative thinkers already, and we can bring that out more in science class.

What has been your favorite part about making Go Extinct?

Marcy: There’s so many … You know how we’re all looking for that thing that we can uniquely do and provide the best? I feel like making good educational science games is something [that] combines my interest in a way that’s uniquely me, so it’s very self-affirming in that way. And I knew it was going to feel like that going in. But I think I’ve been most surprised by how much joy and meaning I’ve gotten from connecting with teachers and students and other people who are doing really cool, engaging, creative things in the science education sphere. 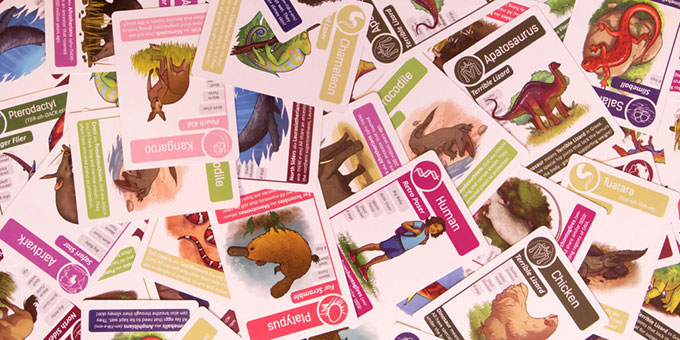 An example of this is meeting Jon Perry from Stated Clearly, who makes these amazing animations explaining evolution in the clearest way. It’s been a way to meet other people doing really cool things, and it’s been exciting …

I think, talking about the DIY platform, it’s great to do projects on your own. But there’s so much you can do when you work with other people. And finding those connections has been an unexpected favorite thing.

Marcy is working on an online platform where kids can create their own versions of Go Extinct based on the organisms they’re most excited about, like bugs or cats. She’s aiming for a release at the end of 2017. We’ll keep you updated here on our blog.