Republished with permission from Jeroen Heremans

Lots of things have been said about gamification in education already. People with degrees in all kinds of professions have expressed their own opinions on the subject. Some agree, some disagree—that’s how life works. You see, I’m not a specialist on the subject … and maybe that’s a good thing.

I’m a Classcraft Ambassador and proud of it. When looking back, it seems like a logical thing. I’ve always been “that geeky teacher” in our school community. The one with the strange ideas. The creative one. Classcraft is a logical addition to my lessons.

Colleagues always ask me where I find the energy and the inspiration to do something completely different. The downside is that everybody thinks that all my lessons are one big spectacular party, where students have fun all the time and never whine about tests or tasks. Especially since I’ve started using Classcraft. And that’s where they are wrong.

Sometimes I just coach my students while they’re doing an exercise. Sometimes I just tell a story in my history class while students listen to me. And that’s OK. It really is. The only thing that is different in the way I teach is that I’m not afraid to try something to see if it works. Some experiments fail, and some are a big success.

That’s why I decided to start my blog. I post things I find on the Internet with a suggestion on how to use them in class. That’s all. To some, it seems spectacular, but it really isn’t. Those things are the things I like and read on the Internet, and they inspire me. You don’t have to invent new things when you want to try gamification. You just need the right inspiration.

Classcraft is big in every way. It’s a complete online world with wonderful features. Some people are overwhelmed by it. Maybe they’re not that comfortable with tablets or PCs or games in general. That’s OK. You can use the games you know from your childhood to start up a small scale activity in your class. I prefer the classic game “Memory” to explain gamification to newbies.

“Memory” is all about finding two of a kind. You organize an even number of cards face-down and take turns finding two cards with the same picture on it. Those rules are very easy. Even if you don’t know the game, anyone can explain “Memory” in under 10 seconds. Ready? Set! Gamify!

You don’t have to invent new things when you want to try gamification. You just need the right inspiration. 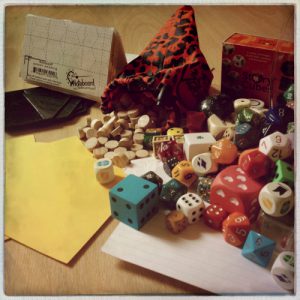 What if you made cards with important words from your lesson and let your students play the game? Now they have to find the same word on the cards instead of finding pictures. That’s the easiest variation. You can make it a bit harder by letting your students explain the word they just found before they can keep the two cards and score a point. You can make it even harder by making pairs with a word and a definition. Now they don’t have to find two of a kind—they have to match a word with a definition.

The only thing that is different in the way I teach is that I’m not afraid to try something to see if it works.

In history class, you can mix and match dates and events. In math class, you can match exercises and outcomes. When learning a foreign language, you can combine words with their translations. The possibilities are endless. All you have to do is think about it and try it out in your class.

Once you’ve tried out a small activity like “Memory,” you can try other games. Every game out there has some basic rules you can use in class. Don’t make it too complicated if you want to try something. Keep it low-level to start with.

A next step could be a student-ranking system, for example, where you keep students’ scores. After that: a reward system. But when I think about it, you probably won’t need the reward system because by then, you’ll be ready to give Classcraft a try. You’re a professional gamified teacher, after all. You just don’t know it yet.

Share your ideas: How have you experimented with gamification in your class?

Jeroen Heremans teaches Dutch, English as ESL, and history in the 3rd and 4th year of secondary school. He’s been teaching for 10 years and started his blog last year with geeky suggestions and lesson ideas. In addition to teaching, he’s an improv actor and gives workshops on “Improvisation and class management’” and “Improv Class for Teachers.”