A professor and other researchers at the University of Montreal have tested out Assassin’s Creed Origins’ “Discovery Tour,” an educational mode that enables players to explore the historical game world in a museum-like context.

The Discovery Tour, which features 75 audio-guided interactive tours designed by historians and Egyptologists, launched with the video game Assassin’s Creed Origins last October for home consoles and PC. Professor Marc-André Éthier tried the mode with nearly 300 high school students across eight schools and 40 classes. The study compared the learning outcomes of a group following the game’s tours with those of a group learning about the subject from a teacher, who used still images from the same tours. 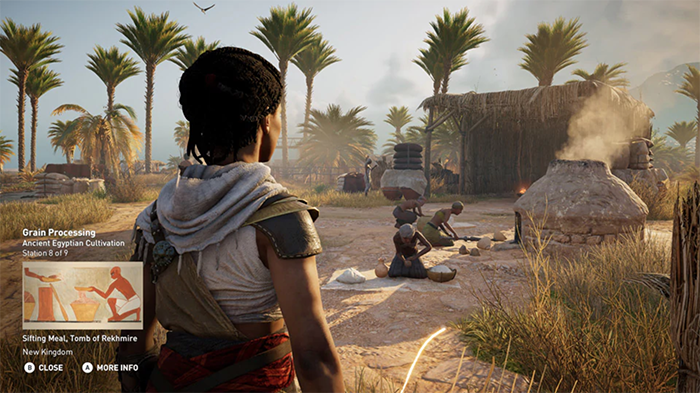 “The teacher could do things with the game they cannot do without it,” Éthier said. “They can show much clearer images of Alexandria, as re-created by Egyptologists, so people who know it well. It’s another resource in the teacher’s toolkit.”

The university’s research was conducted independently of Ubisoft, the Montreal-based company that created Assassin’s Creed Origins and its Discovery Tour feature.

Ubisoft is releasing the Discovery Tour free of charge on February 20 to anyone with the Origins game, or $20 to the general public as a standalone mode on PC.

“The idea is that it is not the game: It’s a specific, educational mode,” said Jean Guesdon, the creative director on Origins. “We are doing a re-creation of Egypt that is plausible, credible, full of truthful information, and that’s what we want to offer.”

Ubisoft isn’t ruling out creating educational modes like the Discovery Tour around other settings in the Assassin’s Creed series, but that’s still a far-off possibility. “We cannot wait to examine this possibility, to hear what people have to say about this initiative,” said Yannis Mallat, the president and CEO of Ubisoft Montreal.